Rambert and Birmingham Hippodrome have released production images for Peaky Blinders: The Redemption of Thomas Shelby, a dance theatre show written and adapted for the stage by Peaky Blinders’ creator Steven Knight and choreographed and directed by Rambert’s Artistic Director Benoit Swan Pouffer, inspired by the TV series produced and owned by Caryn Mandabach Productions.

The show had its world premiere at Birmingham Hippodrome on 27th September, and officially opened the following night, running until 2nd October. The production will then run at the Troubadour Wembley Park from 12th October-6th November, before embarking on a UK tour in 2023, returning to Birmingham Hippodrome by popular demand from 23rd-27th May. 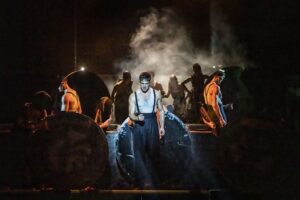 Peaky Blinders: The Redemption of Thomas Shelby will feature live musicians performing a score written by Roman GianArthur and led by Musical Director Yaron Engler and as well as a new track by Laura Mvula. GianArthur’s soundtrack for the production also features iconic songs from the television series and music from Nick Cave and The Bad Seeds, Radiohead, Anna Calvi, The Last Shadow Puppets, Frank Carter & The Rattlesnakes and Black Rebel Motorcycle Club, to name a few.

Through dance theatre Peaky Blinders: The Redemption of Thomas Shelby picks up the story of the Peaky Blinders at the end of World War One, following Tommy Shelby and Grace Burgess through their passionate love affair. While Tommy is building his empire, Grace is operating as an undercover agent for Special Branch on a mission to get close to the heart of Tommy’s gang. As the story unfolds, many hearts are broken.

Tickets are on sale for all venues at peakyblindersdance.com.