What a pleasure it was to watch this double bill by Ballet Black. A company of eight dancers, the individuality of each was allowed to shine through, whilst an overarching ensemble approach provided a strong framework and some beautiful moments of dance.

The first piece, Say It Loud, told the story of Ballet Black. It was used by the company’s founder and artistic director, Cassa Pancho, to bring to the stage a little of the background noise which has accompanied her many years of managing and producing Ballet Black’s work. Although a narrative piece, dance, with all its joy and energy, prevailed. 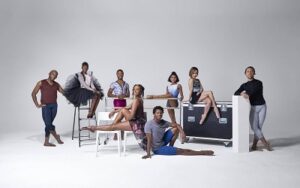 Through a number of sequences, the story of the company was told. Whilst its roots were in London, some sequences embraced the influence of Trinidadian Calypso within the classical ballet form, and the soundtrack covered genres from contemporary classical to gospel. The dancers had a delicacy about their movements, and a fluidity which enabled them to move into moments of power and grace. Costumes in tones of plum and ochre, combined with lighting effects, created a piece with huge aesthetic appeal and atmosphere.

A voiceover punctuated the piece, made up of verbatim comments on Ballet Black from social media, reviews, audience feedback and from the dancers themselves. Whilst this felt slightly heavy handed, it had a potency as it brought into play thoughts of both audiences and dancers. Both the negative stereotyping experienced by practitioners of black ballet and the life-affirming nature of ballet for the dancers was exposed on stage.

The second piece, Black Sun, was more conceptual. An exploration of creative forces, rites of passage, and spiritual influences, it was less easy to read than Say It Loud. But the intensity of the dancing, coupled with striking lighting and costumes in subtle shades of reds and ochres, was absorbing. Once again, the individuality of the dancers shone out as they performed solos, duets and trios. However, the full power of the piece was in the collective: it ended with the whole company dancing to the rhythm of their own hand-clapping and foot stamping, and to the solo voice of one of the dancers. Our common rituals and our shared pulse was the final image. Spellbinding!

Ballet Black is a company with an ability to be flexible, to play with the traditional ballet form and to take risks. And all without compromising its high artistic standards.

Say It Loud was choreographed by Cassa Pancho with members of the company. Sound design was by Jim Carey with additional composition by Michael ‘Mikey J’ Asante. Costume design was by Jessica Cabassa. Black Sun was choreographed by Gregory Maqoma, composer was Michael ‘Mikey J’ Asante, and costume design by Natalie Pryce. Lighting on both pieces was by David Plater.