150 walks, talks and tours scheduled around the city.

Birmingham’s Heritage Week is back for 2022, returning for its 8th year. The popular city-wide festival will shine a spotlight on Birmingham’s fascinating history and will see some of the city’s most important heritage locations and unique buildings opening their doors for more than 150 talks, tours, workshops, walks and much more.

Running from Friday 9th–Sunday 18th September, this year’s festival will include guided tours, special outdoor performances, walks and the chance to sketch the city or have a go at bell-ringing!

Birmingham Heritage Week 2022 will feature a wide variety of events on offer with regular and popular venues returning. Among them Highbury Hall in Moseley, Birmingham & Midland Institute, the Roundhouse and Birmingham Cathedral in the city centre and religious buildings and churches, including three dating back to medieval times. 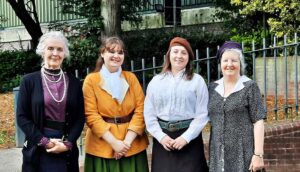 Many of the city’s museums will either open for free or host special events during Heritage Week and in Bournville, 11 venues will open their doors on the same day (Saturday, 10 September) and visitors can visit one or two, or all of them.

All events can be booked now at birminghamheritageweek.co.uk Here’s a list of highlights:

· A visit to the The Birmingham Gun Barrel Proof House on Banbury Street, Birmingham
· A tour of the newly-opened West Midlands Police Museum on Steelhouse Lane
· A visit to the Grade II* listed Singers Hill Synagogue on Blucher Street in Birmingham city centre
· A Gallery Walk and Talk at the Barber Institute of Fine Arts at the University of Birmingham
· A tour of the Acme Whistles factory – the world’s most famous producer of whistles
· A behind-the-scenes tour of the Lapworth Museum of Geology at the University of Birmingham
· A visit to the Severn Street Masonic Hall in Birmingham city centre
· Learn about Birmingham’s rich cinematic history with Flatpack
· A Lunar Society Heritage Trail
· Afternoon tea at the Old Rep theatre or Assay Office in the Jewellery Quarter
· For all the family – living history, model boats, arts & crafts and playground games

People can also get active and creative at this year’s Heritage Week. They can:

“We are so excited for the return of Heritage Week and this year people will be spoilt for choice for guided tours, some are which are themed – such as Sherlock in the City and A Taste of Handsworth – while others explore the history of areas further away from the city centre, as we visit Longbridge, Acocks Green, Spaghetti Junction, the University of Birmingham Edgbaston campus, Birchfield, Yardley and Sutton Coldfield to name but a few.

“More announcements will be made as we get closer to Heritage Week so be sure to visit the Birmingham Heritage Week website and social media to find out more.”

More details can be found at birminghamheritageweek.co.uk.