Another landmark for long-running Birmingham festival.

Running from Friday 8th-Sunday 10th July in the picturesque surrounds of Moseley Park and Pool, the three day event saw over 60 artists and acts perform across four stages.

Among the highlights were Friday night’s headlining appearance by Coventry’s much-loved The Specials, who performed a tight set of protest songs and their greatest hits, including Too Much Too Young and Ghost Town; and a rare UK appearance from New York funk pioneers The Fatback Band on Saturday, along with a dazzling crowd-pleasing set from Mancunian soul revue, Oh My God! It’s The Church. 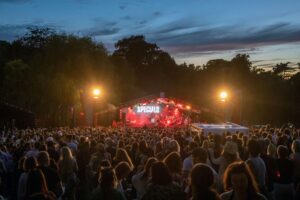 The festival wound up on Sunday with a thrilling appearance from rising jazz singer Lady Blackbird, US hip hop trio De La Soul, and the joyous Earth Wind And Fire Experience.

Although Craig Charles was unable to host his traditional Saturday Funk And Soul Club Stage (due to testing positive with Covid just before the festival), Bristol DJ and producer Boca 45 was quick to step in to ensure the party atmosphere continued unabated, while legendary DJ Norman Jay MBE deputised for the evening’s After Party.

The annual festival saw in the region of 15,000 people attend over the three days, with temperatures hitting 28°C on Sunday evening.

John Fell, Mostly Jazz Funk and Soul Festival Manager said: “The response from festival-goers this year for Mostly was incredible. It was a great mix of artists, and styles, from ska and reggae to hip hop, disco and beyond, including rave anthems, and gospel soul.

“Away from our big name headliners, like The Wailers, there were some really great sets from London LGBTQ+ club night Horse Meat Disco and Hooker Club, Children Of Zeus, and Coops, as well as rising West Midlands artists, such as Tom Ford, Echo Juliet and Sam Redmore.

“Meanwhile, the weather was perfect!”