Birmingham indie four-piece The Clause are back with another fantastic single, Forever Young, which comes out this Wednesday 13th July. It’s a huge singalong track for the summer and is yet another example of their 60s swagger and gritty 90s sound and attitude. The song will be available to stream on all platforms.

Forever Young effortlessly combines catchy singalong choruses, huge hooks, 90s style and a riotous attitude, and it was written at the height of lockdown on frontman Pearce Macca’s birthday when he was feeling huge frustration at being locked in the house during what should’ve been the best years of his life. 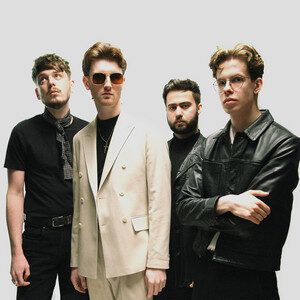 Pearce says, “The feeling of watching the best years of my life dissipate in front of me due to being locked down sparked the creation of this track.

“It’s about sticking your fingers up to the world and refusing to grow up. It’s so easy to be forced into conforming to the expectations of modern society nowadays; but I’d rather be happy and stuck on the breadline than selling my soul to the corporate world and living a life of misery. As the song states – ‘Money can’t buy time’ – and the most important thing is the people around you and staying true to yourself.”

The band, who consist of frontman Pearce Macca, drummer Niall Fennell, bassist Jonny Fyffe and guitarist Liam Deakin, are in the midst of a multitude of UK festival dates this summer, and they still have plenty more on the horizon, including a shoe with Ocean Colour Scene at the Birmingham Irish Centre on 26th August and many more to come. This follows their first headline tour back in February, as well as support slots with the likes of The Pigeon Detectives, Miles Kane, The Slow Readers Club, DMA’s and The Snuts over the past year.