Beautifully shot, but somewhat meandering, Once Upon a Time in Calcutta reveals the complexity of Calcutta as it wrests its way into the 21st century. Its close-knit but crowded neighbourhoods refute the gleaming new buildings which are sprouting up all around. Workers standing shoulder to shoulder in the back of a pick-up truck contrast with sleek conference room where agents of a ponzi-scheme are gathered. The fumigation of mosquito-filled passageways counters the air-conditioned interiors of the city’s new high-rise.

Against this backdrop, Ela, who is grieving the death of her young child, strives to rebuild her life. Daughter of a cabaret artist, she is in dispute over a jointly-owned property with her step brother, Bubu. The property is an old and dilapidated theatre, which has been in the family for years. For Ela, the allure of turning it into a profit by selling it off to a development company to finance the purchase of her own home is strong. And property developers are crawling over Calcutta, throwing up new apartment blocks, flyovers and bridges at a rate of knots. 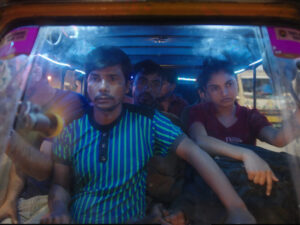 As she moves between the city’s overlapping seams of poverty and wealth, Ela rubs up against the haste of urban restructuring, the political gloss which seeks to conceal its challenges, and the endemic corruption of its construction industry.

Visuals and sound do much of the heavy lifting in this film, where dialogue is sparse. Aerial shots convey the ways of life in the city, particularly shots of interiors which are full of detail. Sound effects, from dogs barking through to the noise of traffic and sirens, express its tumult. The insecurities of life, and the precariousness of incomes for the many, are conveyed in the eyes of the actors and the exchange of their glances.

Characters, though more often seen than heard, have depth. Ela herself is complex: faced with the predicament of her family history and its connection to theatre, the pressure to sell the property sits uneasily with her. Mental health issues are touched on through the character of Bubu, whilst the dilemma faced by Raja, trapped in the middle of a ponzi-scheme and chased by creditors, is well developed.

Irony is used to good effect: with a sound track suffused with songs by Tagore, words of purity and innocence contrast with the dogma of the city’s politics. And Tagore, it would seem, has the upper hand as the profiteering and exploitative property dealer meets an untimely end.

In need of some judicious editing, Once Upon a Time in Calcutta nevertheless has some fine cinematography, some in-depth characterisation, and addresses themes which are relevant not only in India but also globally.

Screenplay and direction were by Aditya Vikram Sengupta. Sreelekha Mitra was Ela, Shayak Roy was Raja and Bratya Basu was Bubu. It is a 2021 Bangali language Indian-French-Norwegian film.

Once Upon a Time in Calcutta is part of the Indian Film Festival which takes place annually in Birmingham, London and Manchester. It runs at various Birmingham venues until 5th July. Further information.