Strict officials at the Commonwealth Games are threatening legal action to force a harmless series of bar games held in city centre pubs to change its name.

What was known as the Commonman Games, organised in Birmingham city centre’s entertainment district by Westside BID, is now having to consider changing its name to the (un)Commonman Games.

The Commonman Games was unveiled nearly a month ago as a selection of events that anyone could take part in free of charge to help celebrate Birmingham’s Commonwealth Games 2022. 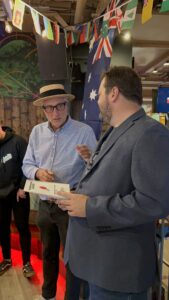 Khemi Salhan, the brand protection manager, wrote: “Our primary concern is the name of the event.

“The name ‘Commonman Games’ is similar visually and aurally to ‘Commonwealth Games’, and is being used in relation to a competition … due to take place in Birmingham City Centre, on the same dates as the Games …

“This association has not been authorised by the Birmingham Organising Committee for the Commonwealth Games (the “OC”), and therefore amounts to an infringement of the OC’s exclusive rights …

“We therefore ask that: The name of the event is changed to reduce the association with the Games; and References to the Games on the Westside BID website are removed.”

The letter was preceded by a meeting at the beginning of July at the Commonwealth Games offices – which reside on Westside – when Westside BID was confronted by a lawyer acting for the Games. While no legal action has yet commenced, both the lawyer’s conversation and the brand protection manager’s letter three weeks later heavily implicated that this could happen.

But in a bizarre twist, because it has taken the Commonwealth Games officials so long to actually write to Westside BID, the official Games has allowed the Commonman Games to launch in all its glory and with its original, unchanged name at the Walkabout Bar on Broad Street on Tuesday

In the official email, Khemi Salhan says: “Apologies for the delay in getting this across to you – we needed to discuss it with a couple of teams internally … We appreciate that the first event is tonight [Tuesday], and therefore ask that the action points suggested above are actioned following tonight’s event but ahead of the next event.”

Mike Olley, general manager of Westside BID, said: “The word ‘jobsworth’ is a very hurtful word and so I am always very reluctant to attach such a description to anyone’s job role.

“But to receive an official email entwined with such strict legal references about a series of events in pubs and bars that are akin to a game of bar skittles is probably the silliest communications I have ever received.”

Gerald Manton, chairman of Westside BID, said: “Our Commonman Games isn’t a competition,it’s just a bit of fun. While we have a leader board at each location showing that day’s high scores, everyone who completes each and every challenge receives a medal, irrespective of a score.

“What we may well now have to call the (un)Commonman Games was only ever conceived to honour and respect the real and massive Commonwealth Games, along with all the serious sports that involves.

“Our whole intention was merely to be inclusive of staff and customers in and around the golden mile of Broad Street, giving them a bit of fun and triggering them to think about the great athletes performing in our city.

“We will, of course, take the Commonwealth Games’ email seriously, as we have no desire to be taken to court which would be a waste of time and money for all involved.

“But how daft is it that this may well now result in us having to call our fun little series of bar events the (un)Commonman Games, by official instruction of the Organising Committee of the Commonwealth Games!”

Mr Olley added that, like the Commonwealth Games officials, he would now need to discuss the issue “with a couple of teams internally” and he apologised in advance for any delays in responding formally to the Games.

But he confirmed: “We are now actively considering changing the name of our events to the (un)Commonman Games. This could well be the most efficient and cost-effective solution as all it requires is for us to make the change in marker pen on all our posters and leaflets.

“We will now be arranging the necessary internal meetings as soon as possible and will try to avoid a three-week delay like the one we experienced from the Commonwealth Games!”

Full details, dates, times and locations on the (un)Commonman Games can be found here.

One thought on ““Jobsworth” threat to pubs event”