The search to discover hidden tickets to The Hundred returns.

The Hundred is returning to Edgbaston to excite crowds with another year full of world-class sport and live entertainment, and to celebrate, there’s 100 tickets hidden across the West Midlands up for grabs.

The region’s team, Birmingham Phoenix, will be back in action in this year’s competition at Edgbaston for four unmissable home fixtures. Ahead of the first home game, Birmingham Phoenix has hidden 100 tickets (50 branded cricket balls) in unmissable bright orange boxes in eight locations across the West Midlands. 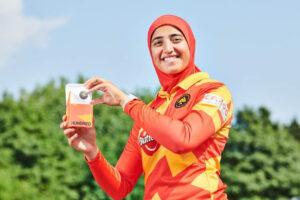 With 100 tickets* up for grabs in Birmingham, Coventry, Solihull and Wolverhampton, anyone lucky enough to find one of the five hidden cricket balls in each location will win tickets to watch the first home match for Birmingham Phoenix men’s team who will be taking on last year’s men’s champions, Southern Brave, at Edgbaston Stadium on Wednesday 10 August at 6:30pm.

Fans of The Hundred are invited to search through shopping and leisure destinations, famous historical monuments and community locations across the West Midlands to find the bright orange packages, which reflect the Birmingham Phoenix team colours.

There are eight venues across the region involved in the treasure hunt, which include Touchwood, Birmingham Museum and Art Gallery, Southside and Wolverhampton Art Gallery, as well as four community locations including mosques and wellbeing centres.

If properly stumped, fans should follow @BirminghamPhoenix on Instagram, along with the hashtag #everyballcounts for vital clues.

The lucky finders of the 100 tickets can also look forward to a live performance pre-match at Edgbaston from Birmingham-born and BBC Introducing’s, Leadley.

Craig Flindall, general manager of Birmingham Phoenix, commented: “We’re so excited to see fans of all ages at Edgbaston for this year’s competition. This year, we’ve gone bigger and better, with 100 tickets hidden up for grabs not just in Birmingham, but across the West Midlands. We’re hoping those who find the cricket balls will enjoy everything The Hundred has to offer, which promises to be another year full of world-class sport and live entertainment for the whole family!”

For those who aren’t lucky enough to find one of the hidden cricket balls, tickets start from just £18 for adults; £5 for under 16s, and under 6s go free.