Birmingham’s Dig Brew Co brewery is opening a pop-up craft beer shop that customers can drink in throughout the Commonwealth Games.

Based in a former florist on the corner of Piccadilly Arcade opposite Birmingham New Street Station, the thirst-quenching outlet will offer an extensive range of beers to take away or simply enjoy on the premises.

Opening on Thursday, July 28th following a successful soft launch, the 473 sq ft pop-up will be open for the Games and beyond from 4pm to 1am daily. 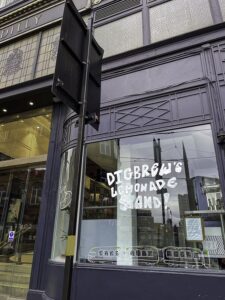 The move follows Dig Brew Co’s success in winning major export orders from markets as far away as Australia and Japan and launching the first American-style craft beer made exclusively with British hops.

Oliver Webb, owner of Dig Brew Co, which opened five years ago on River Street in Digbeth, said: “We couldn’t have dreamt of a better location and are moving quickly to complete the refurbishment in a way that will showcase our business.

“Customers can expect the chaotic and wacky experience that is Dig Brew Co’s trademark, with quirky artwork and photos, and a range of music CDs that guests can choose to play. If the painters are still at work, we will still be open!

“The pop-up will appeal especially to the hundreds of athletes and others staying nearby that are interested in craft beer and encourage all customers to visit our taproom and pizza kitchen in Digbeth only a mile away.”

Oliver added: “As a small business with global ambitions, our export success will enable many international visitors to continue to enjoy our beers back home.”

Ensuring that the Commonwealth Games will also be a beer festival, Dig Brew Co also has big plans for its River Street brewery, where it will host Common Fest, featuring its best beer releases, live music with DJs, new pizza varieties, sports quizzes and a big screen for viewing the Games from July 28th to August 8th.

The brewery will also go global with the launch of its popular Cancun lager in limited edition six-pack cans, with each can carrying a different label featuring a cartoon character, Mr Cancun. It will also be available as a seltzer and a slushie.

In a recycling initiative, Bring Me Home, the brewery will also reward customers returning empty Dig Brew cans with a 5% discount on their next purchase. The empties will be melted down to make artwork for pubs and bars across the UK.