Taut and incisive, The White Card reveals the world we live in as one in which whiteness is assumed, unless blackness is stated. A world in which blackness is the other – the skin colour of people who are either criminal or victim, their humanity unseen beyond this binary position. And a world in which white people wear their political correctness on their sleeves, displaying it for all to see.

In the case of Charles and Virginia, they wear their political correctness on their walls. Their choice of art is an expression of how they want to be seen: it has more to do with virtue signalling than with their love of art. By selecting pieces which assert their opposition to racism and fascism, they claim their moral superiority and maintain their position of privilege. 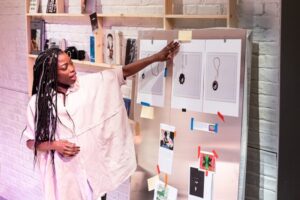 The first act of The White Card is set in a wealthy USA household. Tensions emerge as entrepreneur and philanthropist Charles, his wife Virginia, and Eric, their art adviser, interact with Charlotte, their dinner guest. Charlotte is an artist who uses her art to make visible the invisible experiences of black people, and to bring to light their history, culture and humanity.

For Charles this is an opportunity to further his credentials as someone with a vision for change. Not only might he become Charlotte’s benefactor, but he could offer her a place on the board of his foundation. Oh, and this would help him address the diversity gap in the board.

The second act, a year later, is in Charlotte’s studio. Here, the tables are skilfully turned: Charles, as a white man, becomes the object of Charlotte’s artistic consideration. By putting images of him and his skin colour on the walls of galleries, the question is asked: what would the world be like if blackness were the norm, and white people were the other?

Driven by dialogue rather than dramatic action, the drip, drip, drip of information provided by the characters gives the piece a compelling tension throughout. Although its message is primarily told through the words of the characters, rather than shown through their experiences, the play nevertheless delivers a series of devastating body-blows. Virginia has given the maid the evening off, allegedly to create an informal atmosphere. But, in an off-guard moment, she insists that Charlotte does not help with the dishes, telling her she is not the maid. Not only does Charles’ foundation build hospitals, but it also builds prisons – prisons which incarcerate disproportionate numbers of black people across the USA.

The set for the production, in simple black and white, throws the focus back onto the actors and their dialogue. Style and tone change momentarily between the two acts, when the five scene changers, all black and female, hold up mirrors to the audience, catching its reflection, to the song of This is America. Claudia Rankine’s script is delivered by a strong group of performers, whilst Natalie Ibu’s direction is tight and well judged.

The White Card is a Birmingham Rep, Leeds Playhouse, Northern Stage & Soho Theatre co-production in association with HOME Manchester. Thought-provoking and intense, it is well worth seeing. It plays at the Rep until Saturday 18th June. For further information visit birmingham-rep.co.uk

One thought on “Review: The White Card”