Mustapha Matura must have had more than a few laughs as he wrote this adaptation of the Irish classic, The Playboy of the Western World.

The setting of Playboy of the West Indies, a rum bar in rural Trinidad, allows for scrutiny of the confined nature of village life where nothing goes unseen, and where rumours abound.

It’s plot is a gift for exploring the human psyche: a man walks into a sleepy village declaring that he has killed his father. The villagers proclaim him a hero, but then turn against him when they find he hasn’t.

It’s characters are stock, and primed for humorous exploitation. Ken, sometime hero, sometime scoundrel, is brave, passionate and a marvel at calypso, it would seem. Peggy, his would-be lover, dreams of excitement, whilst her betrothed, Stanley, is only able to offer her respectability and conformity. Meanwhile, elder stateswoman Mama Benin, dispenses wisdom and sorcery in equal measure. 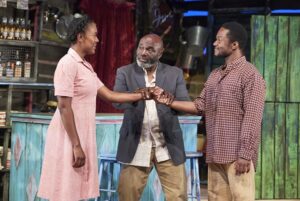 PLAYBOY OF THE WEST INDIES

As Matura’s audience, we want to see his sense of fun delivered on stage. And at times we did, with the songs in this musical adaptation providing much of the banter and jesting. In the first act, the men’s riff on Stanley’s favoured courtship phrase, ‘With respectability comes prosperity’, upending it into ‘With prosperity comes respectability’, was entertaining and droll. In the second act, Mikey, his buddies and Mama Benin, on table tops and chairs, crane their necks to watch the calypso competition which our hero/anti-hero is winning. Their gaze was on a point off-stage, their excitement captured in a 4-part rap, and an underpinning percussion maintained the fever pitch. Our gaze was on them all the way.

But at other times, the play’s comedic potential was underplayed. The scene in which Ken is tied up by the village men-folk, whilst Stanley and Peggy threaten him with a cutlass, is a key moment. The villagers have been challenged time and again in their views of life, and have lost the certainty of their convictions. Chaos abounds, and yet the moment did not carry the weight which it could have done.

The production carried a diversity of musical styles, from calypso to rap, and from crooning to contemporary. Some of the most attractive pieces were duets or trios, particularly those sung by the men. Musical arrangements were often interestingly contemporary but, at times, the sound was somewhat muddied, and the words unclear. This was particularly so for the opening song by the village girls, meaning that the all-important scene-setting content was obscured.

The rum bar setting was well conveyed through slatted boards and corrugated roofing, whilst lighting brought to life the busy interior. Costumes conveyed the play’s 1950s setting, and carried the blues and greens of the surrounding seas. Flashes of colour brought out some of the characters foibles: Mama Benin was in brilliant red, topped with a matching turban, whilst foppish Stanley had a yellow handkerchief wilting from his breast pocket.

The actors conveyed a strong feeling of ensemble which was a pleasure to see. Across the board, performances and singing were strong, and McCallam Connell as Mikey and Angela Wynter as Mama Benin had a joyful physicality about their performance.
All in all, an entertaining evening, and yet there was scope for more humour, and for more commentary on who we take for our heroes, to be wrung out of this production.