Handsworth-born Julie Dexter had made a name for herself during the 1990s singing with Courtney Pine. But in 1999, she traded the UK for Atlanta, Georgia, attracted by the vibrant music scene in the city (as well as the weather). She’s since performed at festivals and venues around the States, and released a string of well-received albums – the latest of which is Déjà Vu. But she still comes back to Brum whenever she can, and is heading home for an appearance at Mostly Jazz Funk And Soul Festival 2022 – appearing on Sunday 10th July.

When was the last time you were here, in Birmingham?

“The last time was right before January 2019 at the Birmingham Symphony Hall Foyer with Soweto Kinch – any excuse to come home and see Mom and my two brothers of course.”

Tell us a bit about your latest album, Déjà Vu.

“Déjà Vu consists mostly of covers ranging from soul, jazz, bossa and reggae but there are a few originals on there also. Gotta make sure I get some publishing.”

Why did you chose some of those particular tracks and artists to cover? 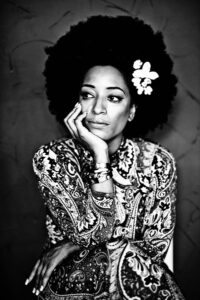 “Being a jazz musician first I have always seen myself as a sophisticated cover artist, meaning that the nature of jazz is playing someone else’s music and making it your own, whether by the arrangement or the way you improvise. The more standards I learned, the more I got into trying to arrange songs that were not in the jazz idiom.

“I started to choose songs that I loved that impacted my childhood, songs by Marvin Gaye, Aretha Franklin and the Beatles. I chose these particular covers because whenever I sing them at gigs, people always ask which CD they are on. Not to say people didn’t ask about my originals, because they did, but I found that the covers resonated more with people because they were already familiar with the songs and they appreciated the arrangements. I ended up putting a lot of those arrangements on my latest CD Déjà Vu – playing on the meaning ‘I’ve been here before’.

“When you do a cover song, people automatically compare you to the artist you’re covering. Rather than me trying to sound like the artist, which is almost impossible to do, I try to make their songs my own. So if a song is usually uptempo I might do it slower, or if it’s an R& B song, I might do a reggae version, like I did with Inner City Blues, or I maybe I’ll do it Bossa style, like I did with Beyonce’s Deja Vu. Lucy in the Sky with Diamonds is one of my favourite covers, I think, and it always goes over well with Beatles fans.

“I remember singing that song as a child and falling in love with the lyrics. They were so visceral to me ‘tangerine trees and marmalade skies’ – I didn’t find out till later on what the song was about and loved it even more because I thought it was brilliant how they made this song sound so beautiful, describing LSD Lucy in the Sky with Diamonds.”

You’re back in for Mostly Jazz – anyone on the bill you’re looking forward to seeing?

“I am definitely looking forward to seeing the Wailers and the Specials. That is part of the soundtrack of my childhood. I grew up listening to both and they have so many classics that I will be singing along to.”

Are you travelling over with your own US band? Or do you have musicians here?

“I will be using musicians based in the UK. While I have been blessed to work with some of the most amazing musicians in the world, I always look forward to coming back home because some of the greatest musicians I know are based right here, in the UK, and have been good friends of mine since I started doing music – like Soweto Kinch, Colin Peters, Ashley Allen and poet Elliott Dexter.”

Do you still have family or friends here?

“All of my immediate family is still in Birmingham and most of my friends that I grew up with still live there too. It keeps you grounded when you can come back home and still connect with people who have known you all your life. We just pick up where we left off. Plus, I know they will knock me back down a peg or two if ever I try to act too big for my boots. I don’t put on airs and graces with them – I know better, they’ll tell me about myself – and they treat me the same way did twenty-plus years ago.”

What’s your plans for the rest of the year? Any more releases coming up or US projects?

“I plan to start working on a new project towards the end of the year. Covid definitely put creativity on hold for me, but am getting back into the swing of things. My children have been my main focal point, but the music has never left me and will always be a part of what I do. I believe that my children have benefited from my career choices, and while I haven’t made millions they have watched me making a living doing what I enjoy, making music and teaching. They may see me get tired but never depleted or depressed about what brings me the most joy, the music and them of course!”