Dave Woodhall talks to one of Birmingham’s great voices.

She’s one of the heroes of the local music scene. She’s worked with everyone from Boy George to the Four Tops, been an award-winning actor and her shows with Jools Holland are legendary. So, in between talking about foot spas and what you can pick up in the middle aisle at Aldi, the question has to be asked – is Ruby Tuner a national treasure yet?

“Behave yourself. I refuse to be anything like that. Life’s too short, I’d rather go under the radar. I like a quiet life, sitting in the garden, listening to the blue tits, sitting here with the sun shining.”

Growing up in Handsworth, did you see yourself as part of the music scene that was exploding throughout the city at that time?

“Music in Birmingham was fantastic in the seventies, early eighties. Playing in the city was incredible. There were so many bands. There was two-tone, reggae, there were soul bands, the bands from Moseley and Balsall Heath. When I was about sixteen or seventeen there were so many bands who were playing around together. Bob Lamb for example, he was UB40’s producer and he was my drummer. Everyone seemed to know each other, we’d play the same gigs such as the Barrel Organ, the Selly Park Tavern, the Mackadown and the Junction at Harborne. We used to meet each other all the time, we were hanging out and and we’d even have the same people in different bands.”

You talk about a strong local scene back then, yet it seems that a good Liverpool or Manchester band always seems to keep their regional identity, yet a successful band from Birmingham often doesn’t. 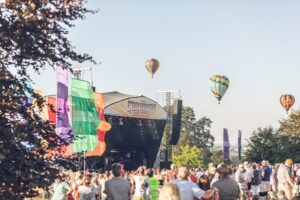 “Whose fault is that? We tend to play ourselves down a lot. Look at me, I said I like a quiet life. We just like to be ourselves, we like to get on with it. Self-effacing, I suppose. People from this area tend not to big themselves up unlike, I suppose Manchester is the obvious one. We have massive acts – Ozzy, Duran Duran, Noddy Holder – they’re massive acts but they don’t seem to have those big egos.”

You work with Jools Holland a lot of the time. If you don’t admit you’re a national treasure, then he surely is one.

“Jools is great. I love working with him and I always have done. He’s such a hard worker, he’s got such energy, such tenacity I suppose is the best word. Such drive. When I’m being a bit of a can’t be bothered Brummie you just look at Jools, at what he is and what he does and he drives you forward. There’s á saying that you sharpen iron with iron and that’s him. You’ve got to be at your best with him and that’s what keeps the fires burning.”

He’s also got an incredibly versatility about his music. Jools could probably play a dozen gigs and every one in a different genre.

“That’s Jools. He’s a lexicon of music, a real library. He first got me into blues and boogie woogie, but our connection was really through gospel music. He got me into Sister Rosetta Tharpe, who I’d never really heard before. Jools knows so much about music – you’ll see him backstage before we go on, there’s a piano there and he’ll be playing some song that I’ve not heard, some completely different style to what we’re performing and he’ll just be playing because he loves it. He just loves music.”

One gig you’re playing is the Cornbury festival in July. You’ve performed there before.

“Cornbury is super, it’s really great. We played there in 2017 and it’s just a fantastic place. It’s not like a mini-Glastonbury, it’s completely different. I love the idea of getting there early, walking around, buying lots of rubbish then sitting down and listening to the music as a fan. Then I’ll go backstage, put my dress on and get ready to perform myself. Last year I was at the Moseley festival and that was great to listen to Richard Hawley, who’s a guy I’ve known for a long while, sit there and be a part of the audience.”

Steve Winwood’s on the bill for Cornbury. He’s another Brummie icon.

“Absolutely and there you are, he’s produced so much work. He’s such a great artist and he’s not into that legendary status because he’s not that kind of guy. He’s just got so much talent he doesn’t need to boast, and there are so many of us who perform like that.”

It could turn into an outdoor version of Jools’ Hootenanny, when every year it seems there’s a Brummie takeover.

“Sometimes I’m the only Brummie on there, but there’s been a few of us and we’ve always had a good time!”

It’s a shame that this will be the last Cornbury.

“It’s a real pity that the festival is ending. It will be great to play there even it will be bittersweet because it’s the final day. But I have noticed that there have been lots of shows re-scheduled from the past two years. You can’t be in the business without knowing the effect it’s had and now there’s the way the economy is going. We’ve done a lot of re-scheduled shows and sales have been good but there are still a few that haven’t sold out. There’s a wariness of going out and spending your money when maybe you can’t afford it. Buy hey – we’ve got Cornbury coming up and we’re going to make it so great that the promoters will be forced to change their minds about closing.”