There aren’t many stand-up comedians who can introduce themselves on stage with a showreel of all the Hollywood blockbusters that they have appeared in. Djalili, though, is probably more widely known for his roles in the likes of The Mummy, Gladiator and Mamma Mia 2. The majority of website search engines have him listed first and foremost as an actor, however Omid has also been treading the boards as a stand-up comedian for near on thirty years.

With smoke machines and flashing lights accompanying his arrival on stage, it had more of a feel of a prime-time Saturday night TV entertainment show than the ninety minutes of comedy that was to follow.

As with so many other shows that are touring the country at the moment, this had been postponed by over a year from the original date due to you-know-what. There was no sign of ring-rustiness though, as Djalili employed the well-worn tactic of flexing his material enough to incorporate local references to get the crowd on side. Throw in a bit of topical material too – the subject matter tonight including the Chris Rock/Will Smith Oscars slap and Omid’s own recent appearance at the Queen’s Jubilee celebrations, both routines with nice payoff lines – and we were off and running. 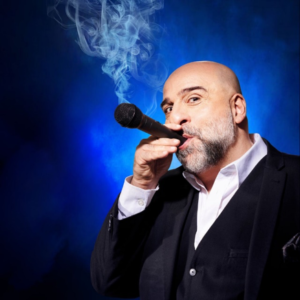 The title of the show, The Good Times Tour, related to both the relief of the apparent end of COVID restrictions and the ability to go out and enjoy life again in near normality (before monkey pox hits us), but also a reflection on the good times that the enforced lockdown had brought – whether that be applauding the NHS or completing Netflix.

Hardly ground-breaking stuff, but it didn’t need to be. This was more of a cathartic exercise for both Djalili and the audience alike as we reflected on the weird experiences that we had lived through over the past couple of years. For Djalili this had meant Zoom gigs and drive-in shows in shopping centre car parks – neither setting conducive to the self-attentive needs of a stand-up. On the screen, Djalili replayed his short social media films of the time about surviving self-isolation and the adrenalin rush of going for two walks in a day.

There were throwbacks to previous tours with the cracker-style joke/belly dance combinations – albeit delivered with a very self-aware, self-depreciative tone and it didn’t take much encouragement for the Godzilla impressions to make an appearance either. Djalili knows what works and delivered an entertaining show for an appreciative audience

However, to end the show, there was a change of pace and mood as Omid took the opportunity to pay tribute to Sean Lock. Hugely respected within the comedy community, Djalili had supported Lock when he was making his own fledgling steps in the comedy world in the 1990s.

Support for the night came from circuit stalwart and former Perrier nominee Boothby Graffoe, who Djalili described as his oldest friend in comedy. His mixture of daft, sometimes twisted, songs and gentle patter set the evening up perfectly for the showmanship of Djalili to follow.