Tributes have flooded in following the death of sports journalist Bob Hall – a familiar face on TV screens since the 1980s.
Birmingham Press Club president Bob Warman remembered his former colleague as a “very fine broadcaster”, while Press Club chairman Llewela Bailey said: “He was unflappable and a delight to work with. I never once, in twenty years of working with him, saw him panic – in a job that at times demands the nerves of a fighter pilot.

“Bob was a great raconteur and because he was a good mimic his stories were memorable. He was a modest man and never put himself centre stage, despite having an impressive CV in print, radio and TV. A one off – and good friend to his adopted Midlands,” added Llewela.

Bob (pictured), who was in his mid-seventies, was more recently known as a contributor to Jeff Stelling’s Sky Sports Show, Soccer Saturday. Paying tribute, Jeff said: “Bob was eloquent and succinct without any waffle. That is what made him perfect for Soccer Saturday and why he was such an important part of the show for so many years. He will be very much missed by all the team and the viewers.” 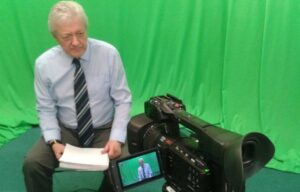 In 1981, Bob was recruited by Gary Newbon to be part of ITV Central’s sports team after covering rugby league for the Yorkshire and Granada stations. After becoming a casualty of a 2004 shake-up, Bob returned to freelance reporting and was a regular contributor to Sky Sports’ popular Soccer Saturday programme, hosted by Jeff Stelling.

Gary Newbon said: “It’s a huge shock, we’re all stunned. As a presenter, Bob was a really solid, safe pair of hands, very professional. He never let you down. He was a good operator and a good professional.”

Paying tribute, Bob Warman said: “He was one of the best. I remember Bob with great fondness. He was truly a very, very fine broadcaster. He was a tremendous ad-libber – he could fill space and time and get you out of any tricky situation. His memory was fantastic.

“He was terrific. His detail, memory and recall used to astonish me. He was a wonderful man to have on your side. You could alway rely on Bob.”

In 2015, Bob Hall was named among a list of recruits for a bold, Birmingham broadcasting venture – the city’s first TV station, Big Centre TV, co-owned by former ATV presenter Mike Prince. However, it ceased broadcasting a year later and re-emerged as satellite show Made In Birmingham.

Bob was also the man in the chair during sell-out Q&A shows with Wolves hero Steve Bull. On Twitter, Black Country Radio posted its own tribute: “We’re sad to hear the news that veteran ITV Central presenter, Bob Hall has passed away. Bob presented our Ask The Leader events for Dudley Metropolitan Council before the Covid pandemic and was a brilliant broadcaster and lovely man. He’ll be missed.”

Actor and director David Alacey, who also worked with Bob, described him as a superb broadcaster, having been impressed by his professionalism and immaculate style.

Sky Sports director of football Gary Hughes said: “I grew up watching Bob on Central Television – he was a hugely respected broadcaster with one of the great voices in the industry. He would happily regale anecdotes about his famous friends such as Ron Atkinson and Alex Ferguson. His experience wasn’t limited to sport, though, as he had served as popular presenter of the classic BBC Series Pebble Mill and so knew many legends from the world of showbiz.”

He also briefly worked for the Express & Star newspaper on its Features Desk.

The BBC’s Nick Owen said it was “shocking news” and “terribly sad”, while presenter Joanne Malin recalled “lots of fun together” as colleagues at ITV Central.

Midlands football clubs have also paid tribute to Bob, who they described as a “respected figure in the press bench.” Coventry City FC said he had “covered the Sky Blues for many years, including the 1987 FA Cup Final” and passed on condolences to his family, while Burton Albion FC said he was “often at the Pirelli Stadium in recent years covering Brewers games and was a warm friendly, respected figure in the press bench”.