Commissioned by Eastside Projects for the Birmingham 2022 Festival, three artists from Toronto and one from South Africa are creating new artworks across Birmingham from June until August.

The commissioned artists, Rajni Perera (Canada), Amy Ching-Yan Lam (Canada), Jon McCurley (Canada), and Thenjiwe Niki Nkosi (South Africa) will explore Birmingham’s positions, affinities and complicities within the commonwealth. It includes art that considers immigration and landscapes transformed by climate, art on the global chocolate trade, art that gives us a point-of-view experience of a small dog abducted and transported to Great Britain for a Queen, and art that offers a provocative meditation on the experiences of Black athletes in the realm of elite sporting competition and mass entertainment.

Gavin Wade, Eastside Projects Curator said: “The approaches of the work are wildly different, based in different experiences and different cultural heritages but they’re all operating in a wider international art world, we wanted to bring some experienced artists who can talk about the Commonwealth to Birmingham and add to our own voices.

“The works aim to exchange ideas and experience between Birmingham and other international voices both historically and in the present day. I think their work will spark a wider examination of the history of Birmingham and how we express our identity” 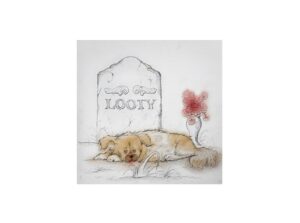 Amy Ching-Yan Lam’s Looty Goes to Heaven (pictured) will be across Digbeth, including the location of the Old Typhoo Tea Factory from 3rd June–8th August. Reviving the story of Looty, a small Pekingese dog taken from China at the end of the Second Opium War by British troops, brought to England, and gifted to Queen Victoria. Amy Ching-Yan Lam places the story in the context of Birmingham, which is the current site of Crufts, the largest dog show in the world, as well as the home of Ty-phoo tea, a brand named after the Chinese word for doctor.

Jon McCurley’s Monsters of the World project can be found in Bournville, including the location of the still-active Cadbury Factory from the 25th June–9th July. Looking into the Commonwealth connections of Birmingham’s industrial past, Jon McCurley’s work focuses on the global chocolate trade through the lens of his Irish-Vietnamese roots, working-class family histories in the UK, and his parents’ experience of meeting whilst working for Cadbury’s.

Thenjiwe Niki Nkosi’s Equations for a Body at Rest will be available across multiple community sites and poster sites across Birmingham from 1st July–8th August. A multi-site video and multimedia artwork exploring the history and connotation of the Commonwealth Games divided into two components: The Same Track, and The Name Game.

The Same Track is a video that plays on screens around the city and uses new and old footage and material to show how the Commonwealth Games have both changed and stayed the same over the years, implying the initiative is an ongoing political project centuries in the making. The Name Game includes a series of posters that allude to old Commonwealth Games posters redrawn to explore the meaning of the current Birmingham 2022 iteration of the games.

Tim Hodgson, Senior Producer at Birmingham 2022 Festival said: “We are proud to be commissioning these four extraordinary artists to shine a light on Birmingham’s fascinating and complex history within the Commonwealth. Whether through events, public art, films or performances, each project encourages us to explore our city and understand our histories and traditions better. This is just the start, in a packed programme of over 200 events across the Birmingham 2022 Festival inviting us to dig deeper and get to know the untold stories of the region.”