More than a decade after first emerging, Grace Petrie stands out as one the most important songwriters working in the UK today. After the release of her album Connectivity in 2021, which reached 37 in The Official UK Album Chart and topped the UK download chart week of release, Grace will be back on the road this May and June for a headline UK tour which includes a date at the Hare & Hounds, Kings Heath.

Exploding onto the folk scene in 2010 with the low-fi acoustic guitar/vocal release Tell Me a Story, Petrie quickly attracted attention with her polemical folk anthems, acerbic lyricism and open-hearted performance style. Support slots for the likes of Billy Bragg and Emmy the Great soon followed, with the Guardian declaring her “a powerful new songwriting voice”. 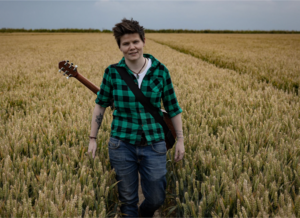 The 2010s were spent relentlessly touring and, responding to the evermore dramatic political landscape before the 2018 release of Queer As Folk catapulted Petrie from cult status to mainstream attention. The Guilty Feminist podcast adopted her as a frequent musical guest, Jo Whiley hosted her for a live Radio 2 session, Emmy-winning Hannah Gadsby requested her as a support in Europe and Frank Turner invited her to open his 12-date UK arena tour.

Now from out of the pandemic chaos comes Connectivity, an album built from the reflections of what humanity means in a world struggling against division and destruction. Glued to one place for the first time, this is a record made firmly out of Petrie’s comfort zone: slowly, intricately, and over many close up, painstaking months. The result is the most honest collection of songs she has ever shared. It is about storms and the rebuilding that follows them, and about how to find a way to carry on the fight for a better tomorrow when every day you are told you’ve already lost. It is Petrie’s most personal – and yet most universal – album to date.