A new way to support your team.

Birmingham City has dipped their toes into the digital pool recently by partnering with a digital company that will see the club represented across the country in video gaming for the first time.

The Blues have signed a two-year deal with tournament hosting and video sharing platform Ultimo GG, who will set up the club’s new eSports team, host tournaments, gaming boot camps, and other events. Players will also see merchandise up for grabs, and they are turning an executive box at St Andrew’s into a designated gaming space to give away to fans. Ultimo COO Ben Husted told eSportsinsider that the club has been a dream to work with, and as they aim to offer a host of new digital initiatives to fans and the local community beyond the usual matchday experience. 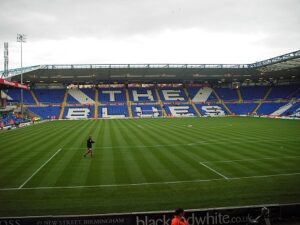 One of those new offers to the club’s fans is the introduction of NFTs, also known as non-fungible tokens. These are exclusive digital assets that fans can buy with a unique identifier meaning the purchaser has a one-of-a-kind piece of art or memorabilia like no other. The Blues’neighbours, Aston Villa, have recently gotten on board with this concept as their club badge has been offered to one lucky owner as an NFT. Also, The Villains are offering their supporters the chance to buy fan tokens, which City is looking to take up too.

There has been a rise in interest for Socios fan tokens over the last six months or so, with more markets opening for the company. Recently, they tapped into the MLS, but their core customer has been Europe’s elite clubs. This was demonstrated by their commercial link up with the Ballon d’Or Awards in December, where they were an official partner. The company offered attendees at the awards the chance to win fan tokens associated with one of their sporting partners. But what are these fan tokens? These tokens are akin to owning a unique digital passport that shows off their support of the club. Their owners will have access to other things, from exclusive special events to having a say in issues at their favourite club via polls exclusive to token owners. The more tokens a fan owns; the more weight their vote has. Also, as each token has its identifying number, it means each one is an extraordinary piece of digital memorabilia in its own right.

One other club alongside the Blues in the Championship has already offered their fans special digital collectables. QPR recently gave their supporters the chance to buy officially licensed, individually serialised digital images. It highlights the direction of travel for clubs is now becoming more digital when it comes to engagement with their stakeholders.

Across Europe, the tokens have been selling out, with the clubs earning 50% of the sales, and with that money coming from supporters, it gives the fans a chance to help their club even more whilst showing off their love of their team. With the Blues fan token offer looking likely to be the first of its kind in the Championship, they’re really leading the way into a positive digital future.