Dave Woodhall doesn’t watch the Villa but enjoys football regardless.

Every cloud has a silver lining and Villa’s game with Burnley being called off late on Saturday afternoon might have led to a windfall for local non-league clubs, with supporters looking for another way to avoid staying in or going Christmas shopping. Villa’s communications left a bit to be desired although the bulk of the blame must fall with the Premier League and their refusal to acknowledge what was staring them in the face a week earlier. In contrast, well done to the clubs who were advertising games on Twitter within minutes of Villa’s announcement and I hope their enterprise was rewarded with a few quid extra in gate money and bar takings. 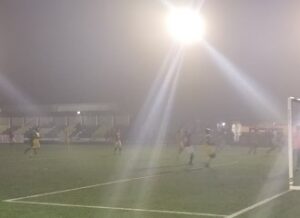 I spent my match time in deepest Willenhall, watching Dudley Town playing Khalsa Football Foundation in the Midland Regional League division one, which is step six for those unfamiliar with this level. Dudley used to be one of the traditional non-league clubs of the area but lost their ground some years ago and since then they’ve had a bit of a nomadic existence, playing all over the borough before ending up miles away at the Aspley Arena, now owned by Sporting Khalsa.

It’s a tidy enough ground with a couple of stands that can easily hold 500 but it wasn’t until I got there that I remembered the most notable feature of the place, right back to the days when WillenhalL Town were playing here – it’s the only ground outside the Arctic Circle that can rival Oldham for coldness.

Ironically, despite being so far from home, the club seems to be thriving; the gate on a horrible afternoon was around a hundred with plenty of families and children in evidence. There also seemed no shortage of volunteers helping out and some very nice samosas available. It’s a 4G pitch, which I don’t like but at least it meant the game was certain to be played and they do bring in a tidy sum in midweek rental.

Dudley were fourth in the table, Khalsa bottom and the game reflected that. The home side scored in each half and were crusing towards an easy victory before a breakway goal for the visitors made for a more interesting end than had seemed likely but there were no further goals. The murky drizzle made visibility difficult as night fell and the floodlights were working as hard as the players. The weather was cold and damp, anyone who doesn’t understand this level of football would have questioned our sanity turning out in these conditions and I loved every minute of it.