There’s another good start to November at Bilston’s finest.

On Tuesday 2nd one of the greatest bands in British musical history return to the Robin. Dr Feelgood came out of Canvey Island in the seventies looking like a bunch of car mechanics on a night out and sounding like the police were after them. Since then they’ve undergone numerous changes in personnel and now with a line-up that’s been playing together for more than two decades they’re still rocking their audiences into bad health everywhere they perform.
Tickets £16.50

Friday 5th sees the Robin hosting the Music & Laughter Show, featuring comedian Doug Parker and musical duo Steve Ashcroft & Martin Lewis. Coming together as a result of occasional shows where Doug Parker and Steve Ashcroft worked together, audiences are in for a two-hour show combining the best of inoffensive comedy with music to listen to and sing along with.
Tickets £11 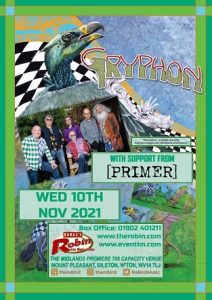 Another regular returns on Wednesday 10th when prog rock legends Gryphon will be on stage. Last year saw the band’s first album for two years, Get Out of My Father’s Car, which was astonishing progress because the previous album, ReInvention, had been their first since 1977. Still refusing to be pigeonholed, the band will no doubt be utilising, as ever, around thirty different instruments in providing a musical treat for discerning ears.
Tickets £19

And the following night, Thursday 11th, will see something a bit different. The Anti Nowhere League first grabbed public attention in the early eighties, when the first (and second) flush of punk was falling out of favour. Leather-clad and studded, the band courted controversy and made the charts in equal measure and despite recording, touring, splitting and doing it all over again at regular intervals in the meantime, nobody has yet worked out whether they were serous or not.
Tickets £14

Acid jazz pioneers The Brand New Heavies will be in town on Friday 12th. With a string of hit singles and a couple of platinum-selling albums behind them, the band reformed recently and have been touring their brand of acid/funk/soul to widespread acclaim.
Tickets £30

On Saturday 13th there’s a return for one of the most popular and enduring new wave acts of all time. The Skids formed in 1977 and had a string of hits before moving on to success in other projects, not all of them musical. Since reforming, their addictive back catalogue and hyperactive frontman Richard Jobson has led to the band becoming one of the top live attractions on the festival circuit as well as touring extensively.
Tickets £25

Sunday 14th sees the return of another Robin favourite. Now celebrating their fiftieth anniversary, Dutch prog rockers Focus continue to entertain audiences worldwide with their frontman, the singing flautist Thijs van Leer leading the band through a selection of their best-known works.
Tickets £16.50