Birmingham Jazz are bringing another big name to 1,000 Trades this coming Friday.

Clark Tracey has been a significant feature of the British jazz scene for decades. First appearing for Birmingham Jazz in the 1970’s with his father’s band the Stan Tracey Quartet, over the decades he has been noted for putting together bands of emerging talent, of which this one is the latest. Sadly, it may also be the last as this is both Clark’s 60th Birthday Tour and his farewell. It’s an event not to be missed. 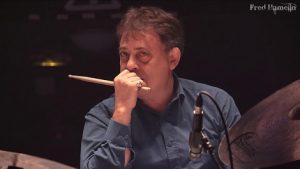 Drummer Clark has worn many musical hats over his forty-five year career. Having long been regarded as the UK’s most accomplished straight-ahead jazz drummer, alongside that considerable achievement he’s also a composer, arranger, educator and talent spotter par excellence.

All of these skills come together in another of his passions, band leading. Clark’s been fronting his own units since the early 1980s, in effect creating a finishing school for three generations of British jazz talent.