Rockers old and new are upcoming at Bilston’s finest.

On Wednesday 14th October, local alternative rockers Liberty Lies will be launching their new EP. Formed in 2008, the band released their first recording in 2010 and have since made two highly-acclaimed two albums as well as touring extensively throughout the UK and Europe. Channeling their classic rock influences, the band will be looking to grow a fanbase that has seen them gain airplay on Kerrang and Planet Rock in addition to many other independent radio stations around the world.
Tickets £8

Saturday 16th will see the Bostin’ Days Festival taking place. Kicking off at 12 noon, this showcase of the best in grassroots festival music from around the country encompasses folk, punk and just about every other genre you can think of Headliners will be politico-folk-punks The Men They Couldn’t Hang and profits from the day will go to CHIPS, a charity that raises funds to purchase specialised powered wheelchairs for youngsters with varying disabilities.
Tickets £33 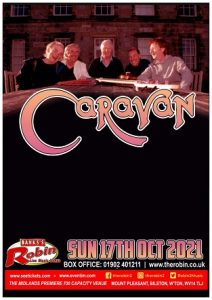 There’s a return for an old Robin favourite on Sunday 17th. Caravan were one of the pioneers of the British prog movement and their brand of crafted songwriting and talented musicianship has seen these cult heroes of the sixties Canterbury scene maintaining a dedicated and loyal following over the years.
Tickets £24

Another regular at the Robin will be in attendance on Wednesday 20th. king King have been described as the finest blues rock band in the world, and while that claim may still be up for debate, there’s no denying the Glaswegians’ ability to thrill even the hardest-bitten audiences. With five studio and two live albums under their belts, the five-piece Kings have returned to the live scene with a vengeance and this promises to be another memorable night.
Tickets £28

For tickets and more details about these and other events at the venue, ring the box office on 01902-401211 or visit therobin.co.uk