Jessica Harris watches the latest online offering from the RSC.

This production of Romeo and Juliet, currently available on BBC iPlayer, pulsates with energy and physicality.

Part of the BBC’s Lockdown Learning’s Shakespeare Week, its modern setting, minimal staging, and the contemporary themes which run throughout, are set to woo the hearts and minds of young people.

Humour was the keystone of the first act, with as much wry comedy wrung out of the text as possible. Mercutio is the clown of the piece, making expansive use of body language, and generally rude language at that.

Dance, music and lighting were used to great effect: the Capulet’s party was a riot! More like a night club with a great vibe, than a stately house gathering in Verona in the Middle Ages. You just wanted to be there! 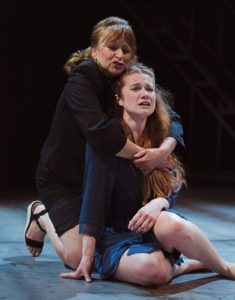 Through high energy action, and youthful physicality, the theme of gangs came through loud and clear: of how we ‘other’ those who are not of our tribe, and how this ‘othering’ leads to hostility and enmity. From each side, a young life is lost, Tybalt from the Capulet family and Mercutio from the Montagues.

The second act contrasted sharply, taking us deeper into themes of violence, patriarchal power and love. The scene in which Juliet’s father commands her to marry Paris, against her wishes, is chilling: we see him use emotional and verbal abuse against Juliet, her mother and her nurse, none of whom have the authority to fight back. They simply have to take what he dishes out.

Or so it seems, until Juliet feigns death to avoid complying with his wishes. This is a step which leads to the inevitable, her actual death, leaving her father to grieve the loss of his only child.

Romeo, played by Bally Gill, and Juliet, played by Karen Fishwick, compliment each well: Gill moves fluidly from humour to moments of passion. Fishwick’s soliloquies are expressive and powerful.

The nurse, played in a non-nonsense way by Ishia Bennison, and Friar Laurence, intelligently played by Andrew French, are mentors to the two young people, making up for parents who stay remote. They drive the plot along as they connive to bring the two lovers together. But, as we know, even the best of intentions sometimes go wrong. The death scene of the two lovers is further dramatised by the presence of the ghosts of Mercutio and Tybalt. A timely reminder of the senselessness of violence.

Produced in 2018 and directed by Erica Whyman, the broadcast of Romeo and Juliet features young chorus members from Hall Green Secondary School, Birmingham

You can see the production on catch-up on BBC iPlayer until early April. It’s well worth it, whether or not you’re studying it at school.