Greenpeace Birmingham hosts online event on the future of transport.

On 20th October, Greenpeace Birmingham Local Group hosted an online event to discuss the improvements needed for local transport and the role that investing in zero-carbon public transport, walking and cycling has to play in a Green Recovery from the pandemic. This event was generously supported by players of People’s Postcode Lottery.

Four local organisations: Extinction Rebellion, Friends of the Earth, AdBlock Brum and Adfree Cities, including MP Liam Bryne and Chris Coyle attended the event to discuss the zero-net carbon initiative and the drivers of change for cleaner transport in Birmingham. Additionally, the prospect of using E-bikes and scooters to commute to work, with the notion of making greener and safer transport accessible to all. Over twenty Birmingham residents attended the event to express their concern about the current dirty transport system. 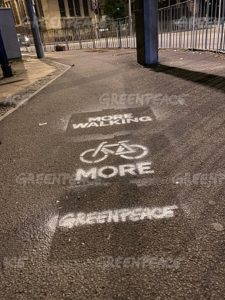 James, from Birmingham, said: “We held this event to call on the UK government to invest £10 billion more every year to transform public transport, walking and cycling and redirect the £27 billion they’ve committed to new road building. Here in Birmingham, I live in an urban area, it feels forgotten about a lot. There is a shortage of bike lanes, hubs, and public transport. We need to see more of these things in urban areas and more encouragement and accessibility to electric vehicles.

The government is expected to spend many billions on new infrastructure to boost the economy as a result of the Covid crisis, including £27 billion on roads. Transport is the UK’s largest source of greenhouse gas emissions, so building more roads only adds to this problem and will encourage more people to buy cars and drive more miles.”

Recent polling carried out by YouGov asked people in the West Midlands to choose their top two from a range of seven proposed transport improvements. New roads were the least popular choice, featuring in just 9% of residents’ picks for what they’d like to see. In contrast, 57% want existing roads to be better maintained, 32% want less traffic on the roads, and 28% want cheaper bus and train tickets. When asked if they’d support or oppose low traffic neighbourhoods, 51% of people in the West Midlands were in support of the measures, designed to reduce traffic in certain streets, improve air quality and encourage walking and cycling, and just 14% oppose.

MP Liam Byrne said, “Two hundred years ago, our region led the carbon revolution. Now, we need to lead the zero carbon revolution – and become Britain’s first city-region, to go net zero. We need to do this in a way that transforms our air quality, keeps on fuelling the community spirit, and rapidly decarbonises the transport system. We led the world during the industrial revolution. It’s time we led the world again!”

Chris Coyle from BYCS spoke at the online event said, “Pushing for zero-net carbon is a game-changer, it will help us to look after the climate and offer a cleaner environment for health and using alternatives like bikes will be better for our wellbeing.”

James continued, “We’re really pleased that Liam Byrne, Steve McCabe along with Chris Coyle came along and spoke about their thoughts and actions to take to shift Birmingham into a greener and decarbonised-friendly city. We welcome their support in pushing for greener, accessible transport in Birmingham, and call on the Chancellor to reverse his commitment to road-building in favour of zero-carbon public transport and active travel.”