Local residents and activists from various groups will today join forces under the banner of ‘Stop HS2 Staffordshire’ to protest and witness the destruction of ancient woodlands near Fradley Junction. They will meet, in a covid-safe manner, at 10am along Wood End Lane (intersecting with the junction of Netherstowe Lane) in Lichfield.

“We welcome more local residents to come and see what is happening on their doorstep,” said Apryl Whitehouse aged 40, an NHS community occupational Therapist from Hammerwich, Burntwood. “It’s devastating to see the damage done to this beautiful ancient woodland. This project has total disregard for nature and I wonder what will be left of our countryside for my children. The damage goes way beyond what can be seen from the roadside, there is a diversity of wildlife and protected species which will have been displaced from their homes.” 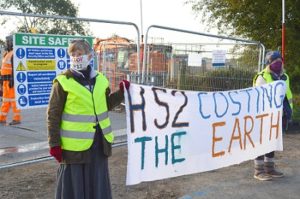 destruction of the woodlands. Also they have paused work on various occasions by blocking the gates and slow walking in front of HS2 vehicles.

Tree felling is officilly allowed to commence today, but campaigners claim that HS2 Ltd have already begun work with the destruction of Little Lyntus and Fulfen Woods.

Luci Ryan, from the Woodland Trust, said the work should be undertaken later in the year for “the best chance of success. [HS2] has carried out these works at the wrong time of year, not only earlier than they should but also earlier than they said they would, which will only serve to increase the damage they have done.”

Britain’s ancient woodlands are being destroyed to make way for the Government’s planned HS2 works. Phase 1 work has been going on all year, all throughout lockdown and during bird nesting and bat maternity seasons on the route between London and Birmingham. The felling is now affecting several of Staffordshire’s ancient and special woods.

Chris Packham, naturalist and TV presenter tweeted on Tuesday “As Boris Johnson told world leaders ‘We can’t afford to dither and delay because biodiversity loss is happening today’ and promised to protect 30% of our land by 2030 , HS2 destroyed Little Lyntus and Fulfen ancient Woodlands”. In a video early this year Mr Packham said Hs2 was “appalling, unnecessary and already redundant…it will destroy almost 700 sites, including well over 100 ancient woodlands and 33 sites of special scientific interest”.

He also lists endangered species at risk, the fact that this project’s costs have already spiralled to over £100billion and that we really need effective local transport systems, not intercity business class travel.

The Woodland Trust has advised that Britain has only 2.4% ancient woodland left and that’s only going to decline further if HS2 is allowed to be completed.

A quote from the facebook of the Stop HS2 Staffordshire group says “Listen to your hearts and join us on Thursday to show the local council, Hs2Ltd and our Government that we care about our ancient woodlands.”