“Not worth the cost,” claim campaigners.

Activists from Extinction Rebellion and HS2 Rebellion will be holding actions at key locations along the HS2 line this morning to protest the spiralling costs and mourn the ecological destruction caused by the contentious high speed rail project. There will be a socially-distanced funeral march through the centre of Birmingham, a Woodland Critters Picnic in Euston and a protest at Manchester Piccadilly station.

In Birmingham, activists dressed in funeral attire will gather at 11am in Eastside Park, directly across from the HS2 Curzon Street Station construction site. They will then march to the HS2 Head Office at Snow Hill. With chants of “NHS not HS2” they will demand the government reprioritise national spending on sustainable projects and tackling the climate and economic emergency.

The groups are opposed to HS2’s eye watering price tag, which has already doubled to £106 billion and is likely to increase further. Beset by delays and skyrocketing costs, HS2 was branded as ‘unachieveable’ last month by the government’s Infrastructure and Projects Authority. The development will also destroy some of the last remaining ancient woodland in the Midlands, with at least 108 sites severely impacted or destroyed nationwide. These venerable woodlands have stood since 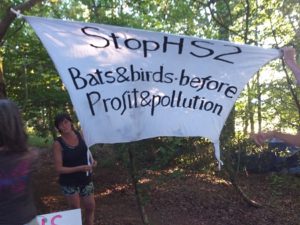 before Shakespeare’s time and are filled with rare and protected bats, badgers, butterflies and other creatures. Wetlands and wildflower meadows will also be decimated.

“During a national pandemic and climate and ecological emergency, our government is destroying precious wildlife to build a trainline no one wants,” said Verel Rodrigues, 25, a mechanical engineer from Extinction Rebellion Birmingham. “HS2 is simply not worth the environmental or economic cost. We could build over 200 hospitals and fund nearly half a million doctors with the money being poured into HS2. Tickets will cost £240, which is unaffordable to most people. And it only makes the Birmingham-London journey twenty minutes faster!”

After gathering at 11am for speeches and stories from those who have been on the frontlines opposing HS2, the activists will begin a solemn procession to the HS2 Headquarters at 11:45am. Once they arrive, they will hold a die-in and eulogy for the lost ecology. “A die-in is a powerful visual image to show the devastating impact of HS2 destruction,” said support worker Sarah Reel, 25, of Extinction Rebellion. “We will send our message loud and clear to HS2 executives that the people of the Midlands are completely opposed to funding this overpriced and unnecessary vanity project.”

Following the die-in, the marchers will return to Eastside park for a family-friendly arts picnic.

Sarah Reel admitted that some people are puzzled that Extinction Rebellion is opposed to a public transport project. “It’s hugely disappointing that HS2 was not designed to be a green alternative in terms of energy consumption and carbon footprint. By its own admission, HS2 will never be carbon neutral. The government should scrap HS2 immediately and instead invest in the NHS, improve existing rail networks and local infrastructure, and adapt to the new reality we face in this COVID-19 pandemic and Climate and Ecological Emergency.”

In London’s Euston Square Gardens, the Woodland Critters Picnic starts at midday, where people are invited to come dressed as woodland animals. There will be speeches from those campaigning against HS2, a samba band and art and drumming workshops. Manchester’s protest will begin at 8:30am outside Piccadilly station.

These events are part of a weekend of national protests leading up to an occupation of Parliament Square in London on the first of September. Extinction Rebellion will highlight the government’s continued failure to act on the climate crisis and demand MPs back the Climate and Ecological Emergency bill. The Bill requires the government to enact urgent measures to curb our greenhouse gas emissions and reduce runaway climate breakdown. Protesters will stay in London for two weeks of targeted actions.

HS2 Rebellion will join Extinction Rebellion at Parliament from September 1st as they continue to highlight the ecological costs of the trainline.