More than 150 jobs are to be created in the West Midlands creative industries, after Birmingham 2022 and CGF Partnerships appointed world-leading sports broadcast company Sunset & Vine as Host Broadcaster to deliver coverage of the Commonwealth Games.

Over the eleven days of the Games, held between 28th July-8th August 2022, Sunset & Vine will capture multi-camera TV coverage of all nineteen sports, ensuring 2,000 hours of spectacular sporting action is available to Rights Holding Broadcasters for distribution to territories around the world, reaching a global audience of more than 1.5 billion people. 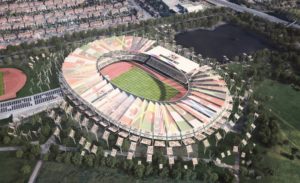 In addition to its broadcast services, Sunset & Vine is committed to launching a Host Broadcast Training Initiative in the West Midlands designed to push boundaries by addressing the lack of diversity in the creative sector.

Tapping into the rich cultural and ethnic diversity of the West Midlands, the HBTI will offer training to 200 young people from the region over a twelve-month period, with 50% of participants recruited from underrepresented groups and a focus on creating opportunities for the BAME community. At least 15% of the 1,600 technical and production workforce will come from Birmingham and the West Midlands and the HBTI will result in 150 Games Time employment opportunities for participants in the scheme.

The agreement will ensure that there is far more sports coverage available than previous Games with each of the 4,500 competitors taking part featured during the Games.

Sunset & Vine is also responsible for full coverage of the highly anticipated Opening and Closing Ceremonies, as well as additional material including preview series about the history of Birmingham and the Games, support programming, highlights shows and short-form content.

The full service media agency is experienced in producing award-winning coverage of high-profile sporting events, including the Commonwealth Games in Gold Coast in 2018 and Glasgow in 2014, the London 2012 and Rio Paralympics, the 2017 World Athletics Championships in London and the 2018 World Equestrian Games.

Most recently, Sunset & Vine won the RTS award for Best Sports Programme for its coverage of the 2019 ICC Cricket World Cup Final. That production has also been nominated for a BAFTA at the upcoming television awards on 31st July 2020.

CGFP, which is a subsidiary of the Commonwealth Games Federation, has embedded resources integrated in the Birmingham 2022 delivery teams, who bring previous Games expertise and generate commercial income for the Games through corporate partnerships, TV rights, licensing and merchandise.

Ian Reid, Chief Executive Officer of Birmingham 2022, said: “Sunset & Vine is internationally renowned for delivering award winning coverage of the biggest sporting events in the world. Working with them guarantees that more coverage of Birmingham 2022 will be made available than any other Commonwealth Games, putting the West Midlands firmly on the global stage and delivering an unforgettable experience for fans.

“I’m also delighted that we’re working with a company that is dedicated to leaving a positive lasting effect on the media industry in the West Midlands by providing jobs and upskilling the future workforce, contributing to our Games mission to help the region grow and succeed.”

Andy Street, the Mayor of the West Midlands, added: “One of the main reasons I was so determined to help secure the Commonwealth Games for the region was the employment opportunities it will create for young people across the West Midlands, and I am pleased to see today’s announcement unlocking hundreds of jobs for local people.

“I would encourage everyone to think about how they can play their part in the Commonwealth Games and help shape the future of our region, whether that is through working with Sunset+Vine or through the thousands of other training and job opportunities on offer. The Games are going to be a real game-changer for our region, and we have to make sure every resident sees the benefit.”

The Host Broadcaster announcement is just one of Birmingham 2022’s suppliers which, by the end of the summer of 2022, will have benefited from an estimated £300 million worth of Games contracts. More information about the Birmingham 2022 Commonwealth Games can be found at www.birmingham2022.com.