Tabor House, an accommodation project for people experiencing homelessness, is preparing to re-open next Monday after adapting its offering to suit new Government guidelines. With the help of a grant from The Edward Cadbury Charitable Trust, the team behind Tabor House is prepared to support what they are calling “a new dawn for homelessness in Birmingham”.

The Digbeth-based project, which is run by iShelter in partnership with Father Hudson’s Care, has transformed its open plan living area into Perspex ‘pods’, with the capacity reduced from eleven beds to eight to accommodate social distancing measures. Guests are being split into those who work and those who don’t, with new cleaning regimes and phased communal meals as part of a new set of processes in place. 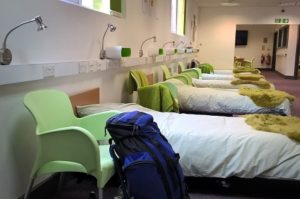 Tabor House previously ran with around seventy volunteers per week, but this has now decreased to 24 people working in shifts, and the facility’s opening hours have also been extended so that guests can remain at Tabor House all day, rather than leaving every morning and returning later in the evening.

The changes have been made thanks to a £20,000 grant from The Edward Cadbury Charitable Trust.

Christy Acton, Deputy Community Projects Manager at Father Hudson’s Care, which supports iShelter in the running of Tabor House, comments: “Some big changes have happened internally over the past few weeks, thanks to the grant from The Edward Cadbury Charitable, and support of Public Health and our key partners. It’s a really challenging time for charities like us; private and public donations have decreased drastically so we also have to look at new funding streams to help secure our future.

“As well as the internal logistics, we’ve identified around a £100,000 funding gap that we need to fill in the next twelve months to ensure that we can continue supporting people off the streets, into Tabor House, and into independent living.”

Tabor House is the latest homeless charity to reopen its doors, following four months of lockdown; which the team spent at a city centre hotel as part of a council-run facility. Christy was part of a cross-charity team that was brought together to support over fifty rough sleepers during an eleven-week period, as part of the ‘everyone in’ policy, which saw hundreds of rough sleepers off the streets and into hotels, hostels and temporary accommodation.

“At the start of lockdown, quick action had to be taken to ensure that the city’s rough sleepers were provided with safe accommodation to aid self-isolation. A council-funded facility was set up in the city centre and we moved six of our guests into their own rooms. We very quickly coordinated our activity with other key services and Birmingham City Council. We were given a direct link to the Department for Work and Pensions too, which aided us with legal status cases, Universal Credit applications, and much more.

“The past few months have been about more than just helping people shield themselves; it has been a great opportunity to adopt some of the Tabor House models around strength-based mentoring to look at how we start to move people into more independent living during and after this pandemic. Since March, we have seen five Tabor House residents moved into their own accommodation, as well as a further 30 across the community,” Christy continues.

Approaching its third anniversary later this year, Tabor House opened as the city’s only permanent night shelter, as a partnership between iShelter and Father Hudson’s Care. In two and a half years, the Digbeth-based facility has welcomed seventy guests and seen more than 35 move into employment and permanent accommodation.

As an accommodation project, Tabor House takes guests through a series of supported steps, including a dedicated mentor that works with them to identify their strengths and work through a plan with them to get them into employment and, eventually, more permanent living. To see the work of the organization and how you can donate, to help ensure the future of the project, visit www.ishelter.org.uk.