Who is Hussain adds to their help for homeless people.

A Birmingham community group has launched another Food Drive to support the local community in these challenging times.

Who is Hussain is a grassroots social justice movement, with teams operating in over sixty locations around the globe, 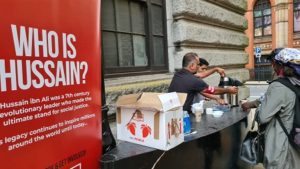 inspired by the timeless legacy of Hussain ibn Ali, a seventh century Islamic preacher whose belief to “Treat your neighbours as if they were your family” was cited as an inspiration by such men as Mahatma Gandhi and Nelson Mandela.

To support the community in combating with the pandemic, Who is Hussain Birmingham volunteers have initiated a new Food Drive on every Thursday evening from 7:30pm to 8:30pm at Edmund Street in Birmingham city centre, serving hot meals, desserts, tea, coffee and water. This is in addition to their long-established work at nearby Chamberlain Square.