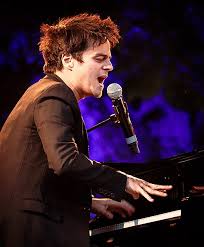 Considering that we are all on Virus Watch, the official sell-out crowd showed a speckle of empty holes in the 2,200 seat Symphony Hall. People are starting to think twice before going out – there’s no doubt about that.

Jamie Cullum, for half his forty years a star, filled the hall, though. He is a spidery little guy, and a cheeky musician too who fools around with numbers enough to keep your imagination alive. He stalks, stomps and gyrates among his seven-man backing group, arranging and re-arranging not only his own repertoire but also earthy and wide ranging classics as well. He’s a talented musician.

And while he seems more comfortable, more adept, in front of the keyboard (and even a synth), he has a good go at standing in front of a mic and belting out tunes with the help of a fine rhythm and blues section.

His own material seems MOR, a little familiar. But he hits his stride on the piano with some of the old stuff. Cole Porter’s I Get a Kick Out of You is beautitfully constructed with the help of some Monk-like riffs. He hits Dinah Washington’s What a Difference a Day Makes with sharp keyboard work that reminded me of the recently departed McCoy Tyner. And Nina Simone’s Runner Sinner Man, a real old-fashioned gospel number, transforms into a seven man Jamaican marching drum outfit (Cullum included) which is a footstomping hoot.

All in all, Cullum is a a fine performer and a great pianist with a real feel for entertaining. A wee man with a big presence – and a nice pair of sparkly trousers into the bargain.

++Jamie Cullum tours for the next two months.