The Ramblers Ball is back and, to celebrate, it’s bringing famous faces from the spoken word scene to Birmingham. Returning to its Digbeth roots on 4th March, the poetry event will take over Evolve once more and will welcome back the Midlands’ favourite, Casey Bailey. Sharing the limelight, Casey will pass the mic to two unmissable spoken-word masters: Ollie O’Neill (front pic) and Saili Katebe (below).

Since his last performance at The Ramblers Ball, Casey Bailey has taken the UK by storm, performing across the country and – perhaps most notably – featuring on BBC One’s official trailer for Peaky Blinders. Now, taking his rightful place back on the Evolve stage, Casey will be introducing his two up-and-coming ones-to-watch. 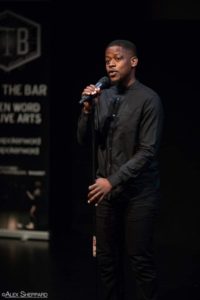 Ollie O’Neill is first of the esteemed performers to be taking on The Ramblers Ball stage: a London-based poet and writer, Ollie will be bringing her experience as a former UK Youth Slam Champion and current Barbican Young Poet to the Midlands event. In March 2019, her debut pamphlet Ways of Coping was published by Out-Spoken Press, and now she’ll be adding The Ramblers Ball to her ever-expanding performance portfolio, having previously read in venues such as The Institute of Contemporary Arts, Soho Theatre, Royal Festival Hall and the 100 Club, as well as at Cheltenham Literature Festival, The Verve Poetry Festival, and Wilderness Festival.

Adding his talents to the mix, Saili Katebe will join Ollie and Casey to complete the line-up, The Zambian-born writer will be making his way to Brum from Bristol, where he’s sailed to success as the resident Bristol Boat Poet and a writer in residence on Brunel’s SS Great Britain.

Looking forward to bringing the two new talents to the event, Casey said: “Birmingham’s poetry community is really up there with the best in the country and there’s no better stage in the city to showcase why those from the Midlands are the ones to watch. I’m am so excited to see these fantastic performers right here in my hometown – they truly are awe-inspiringly talented. You won’t want to miss it!”

The Ramblers Ball’s new chapter will start with a throwback for those who have been part of its journey since it launched in 2018, as the night will be taking up residence in the Evolve at the Adam and Eve once again. With freshly prepared eats prepared by the social enterprise team to complement the performers’ beats, the event is sure to provide food for the mind, body and soul.

Speaking about the grand return, Taylor Barrett, Evolve lead, commented: “The Ramblers Ball has become a staple of the Evolve calendar, with the entire team pulling together to make it the best it can be. It’s a testament to how creative, encouraging, and exciting the city is to be in and the energy is unlike anything else! I can’t wait to see the talent that take over the stage this time around.”

What’s more, if guests fancy getting their own stanzas out for a stretch, there’s plenty of opportunity to take over the mic; there are pre-bookable open mic slots, as well as further chances to sign-up on the night for those who have a burst of enthusiasm.

“Everybody is so supportive, whether you’re an established or an emerging poet, so if you fancy cutting your poetry teeth, with an audience that already feels like family, then The Ramblers Ball is where it’s at. I can’t wait to be bringing this back for 2020, and to see familiar faces as well as those new to the scene. See you there!” added Casey.

Taking place from 6pm-8pm at Evolve at the Adam and Eve, The Ramblers Ball will return on 4th March. To bag your ticket to The Ramblers Ball – or to book your open mic slot – head over here. Tickets are just £5.