Phoenix from the ashes engineering company, BSA Tools Ltd, has taken on its first new apprentice in almost twenty years after being rescued from administration.

Since its rescue in 2017, the new BSA Tools has created 15 new jobs and re-engineered its focus on fresh talent including Dave Loveridge, the first new trainee to be engaged by one of Britain’s most iconic brands, which has a long and established heritage of manufacturing excellence that was linked to the Midlands’ motoring heyday. 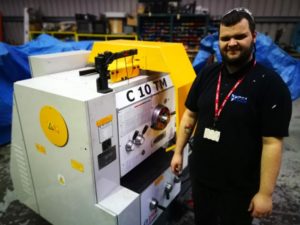 The 24-year-old former mechanic, from Chelmsley Wood, is complementing his immersive two-year apprenticeship at BSA, in Kitts Green, Birmingham, alongside six months intensive study at MAKE UK, the new name for the Engineering Employers Federation, based in Witton.

The business, which supplies and repairs BSA milling machines and lathes used in a wide range of industries all over the world, was bought out of administration in 2017 with a view to re-establishing Britain’s industrial heritage from the steep decline it went into during the 1980s.

“This is great opportunity for me to learn traditional engineering and manufacturing skills from one of the UK’s most iconic companies,” said Dave, who spends four days a week at college.

“I’ve always been good with my hands and have worked in a number of different jobs. But it’s here that I feel I have a real chance of learning the life-long skills that will help me shape my own future.”

Lee Greensall, manager at BSA Tools Ltd, said: “Dave is the first apprentice to be taken on by the business in the last two decades and, with our expansion strategy, he will not be the last – we have big plans.”

In addition to organically growing its own apprentice scheme, BSA Tools is also is reaching out to UK colleges to bolster apprenticeship training and the active promotion of science, technology, engineering and manufacturing subjects.

The future growth of UK productivity in a potentially post-Brexit world means there has never been a more important time to rebuild the nation’s engineering prowess in order to compete on the global stage, according to the business once synonymous with stellar manufacturing heritage.

The Government has invested hundreds of millions of pounds in technology training and the company is encouraging vocational colleges to make contact, both in terms of building a skilled workforce and the provision and maintenance of the vital engineering tool-making machines to train on, many of which are still operating smoothly after several decades of use.

An acronym of Birmingham Small Arms, the BSA name stretches back hundreds of years to the city’s Gun Quarter, which was recently immortalised on the small screen in the hit BBC drama Peaky Blinders.

BSA, which employed thousands of workers in its heyday, was also once the world’s biggest motorcycle manufacturer, owning brands including Triumph and Daimler.