Critically-ill babies and children in the West Midlands will be able to receive faster and more effective care, after Birmingham Children’s Hospital Charity reached its £2 million fundraising target for its Critical Journeys Appeal, to kit out four Critical Care Ambulances with the latest, life-saving medical equipment.

The Critical Journeys Appeal was launched in 2017 to enable the Kids Intensive Care and Decision Support Service and Neonatal Transfer Service, to respond faster and more effectively, helping critically-ill patients and their families in the West Midlands get to the right place, at the right time, for the right treatment. 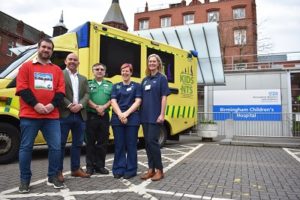 Money raised through the appeal has funded state-of-the art-equipment for the fleet of four Critical Care Ambulances – run by St John Ambulance – which are stationed at Birmingham Children’s Hospital. It has therefore removed the need to share equipment between ambulances, and will ensure the KIDS/NTS service can respond to simultaneous demands and improve response time. This will ultimately result in better care and outcomes for critically-ill babies and children and most importantly, help to save more lives.

Furthermore, the money will enable the KIDS/NTS service to continue to deliver specialist care with compassion, by providing parents and children with added comforts such as phone chargers, snacks, teddy bears and DVDs as a welcome distraction in their time of need.

Hundreds have championed the appeal and generously donated since its launch, including the public, local businesses and organisations, and an incredible £1million grant from Denise Coates Foundation. As well as donations, many chose to fundraise for the appeal, including Round Table Great Britain and Ireland, whose former-President Richard Holland, decided to take on an epic challenge, along with some of his fellow members, by visiting all 92 clubs in the Premier League and Football League in just 92 hours, to celebrate 92 years of Round Table.

Richard was spurred on by his own experience of the expert care at Birmingham Children’s Hospital, after his eldest daughter underwent urgent surgery there, when she was a toddler. Altogether, Round Table managed to raise nearly £23,000, helping to reach the final target.

Dr Alex Philpott, Consultant Neonatal Medicine/Neonatal Transport Medicine at Birmingham Women’s and Children’s NHS Foundation Trust, said: “We’re incredibly grateful to our generous Critical Journeys Appeal supporters, who have helped us to effectively take our service from a gold standard service to platinum, by enabling us to be response-ready and allowing us to move more patients with the same level of specialist equipment used in specialist care. We’ve been overwhelmed by everyone’s support and are delighted to announce that we’ve reached our target!”

Richard Holland, former President of Round Table Great Britain and Ireland, said: “The Critical Journeys Appeal is such a worthwhile cause. The service the team provides – transporting children and infants at their most vulnerable – is such a vital part of their care and treatment, so as an organisation, we knew we want to rally our members to support it. We’re so glad that the money we raised managed to help get Birmingham Children’s Hospital Charity over the finish line!” www.bch.org.uk