Richard Lutz watches a searing account of sexual violence and a descent into hell. 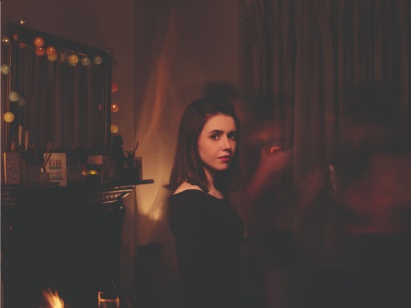 This play begins its UK tour at a timely moment. There’s the Harvey Weinstein court case, the Me Too movement and the destructive poison that erupts from social media.

Asking For It, a play by Irish novelist Louise O’Neill, attacks these issues with a raw anger that burns from the Birmingham Rep stage. It’s not an easy production to digest- it challenges the audience to hear the unpleasant truths about rape, unconsensual violent sex, victim blaming and the half truths that vitiates the lives of the innocent after an attack.

Emma (played by Lauren Coe) is an outgoing 18 year in a small County Cork town. She is gangraped by three boys she knows and subjected to repugnant violence. Her story unravels, not to the police nor in the loving arms of her parents but dripped from Facebook and Instagram, which is brimming with brainless boasts and graphic photographs. Her story of how it harms her, her family, her friends and her town are the strands of the this searing tale.

The play is based on the playwright’s award-winning novel. But there lies a problem; it’s a book. Not all books make great stage plays. And, of course, vice versa. The power of Emma’s trauma is not only in the bitter anger of the dialogue but what emerges inside her head, and that’s tough to replicate in theatre. Director Annabelle Comyn uses voiceover, monologue and video projections to tell her fraught story. But it makes for a long play, with some stretched out longueurs.

It is, in effect, a powerful radio play, but the theatre demands more than a verbal stream of tumult and horror. It needs the physicality of a live production, and whereas the first half has the brio of high school madness, a great dance sequence and the harrowing violence of the rape, after the interval it is more or less people talking at and to each other before Emma ends with a harrowing monologue, starkly lit by a sole spotlight.

Lauren Coe handles this central role, and its difficulties, with commendable raw emotion as she first is hit by shock, then anger, then a doubt whether she allowed this outrage to happen. Her brother Brian (Liam Heslin) helps her keep her resolve as others compromise or question whether she was consensual on a night when she was unconscious for much of the rape. The set is original, built of translucent plastic walls to create a boxed-in world that encloses the central characters and their woes.

Asking For It raises a host of issues and problems we face today. Not only with social and sexual mores. But how they are played out in the free-for-all social media universe where every whisper, every hint of behaviour, every half truth can be spewed out, sometimes with overwhelming and awful consequence. It attacks modern dilemmas. But it’s not a five star night out, more like a descent into a contemporary hell.

Asking for It runs until 15th February. Tickets