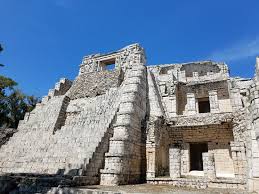 While one has all kinds of misgivings about being here at all, about flying 5,000 miles, about buying into the concreting of the Mexican jungle, about buying cheap Mexican currency, it is really hard in fact, to feel that the native population is being exploited.

The whole of the tourist industry appears to be entirely based upon the work of the Mayan people. In the big resorts there are no ‘white’ people to be seen on the ground and only a few who one would guess to have Hispanic origins. There are Mayans everywhere, and in huge numbers. It can only be, one imagines, that they are poorly paid because of the sheer number of them.

In the resort, we dined in enormous cafeteria/restaurants where at any one time there might be one or two hundred diners, and to meet their needs were always forty or fifty waiters. It wasslightly overwhelming to be descended on as you return toyour table from the buffet to find one person taking your plate from you and another pulling back your chair and another returning your napkin to its proper place.

The instinct is to swat them away and say “I’m fine, thank you,” but the response to such requests to serve one less is met with “But this is my job”. So while you are eating, the Mayans are everywhere, waiting for you to empty your glass or finish your meal so that they can encourage you to have more. But they are not sullen or resentful of their role.

They laugh and joke with each other, they chat to the guests and smile in what seems genuine pleasure in their work.  At the reception desk there will be three or four of them chatting and smiling, apparently eager for the next guest to arrive so that they can escort them to their table and entreat them to mind the step as if their only purpose in life was to ensure their comfort.

I found the experience an uneasy one at first. Here again I am the big white man being waited upon by a single race of people once subjugated by the Spanish and now humiliated by receiving the few dollars that we leave on the table for them to assuage our guilt. Do they return by bus to squalid homes in Cancun slums? Do they feel themselves to be slaves to the giant economies of Europe and North America and hate us for it?

Despite the enormous and disproportionate cost of staying in the Moon Palace, there are restaurants of supposed quality where you pay a premium. You can drink wine from a list rather than the limited selection on offer for free; you can eat more expensive cuts of meat and presumably have even more waiters than in the ordinary places.  But this of course is not for us. Instead we eat in the ‘standard’ Italian restaurant.

This restaurant is palatial by any means. It is at least fifty metres square. The ceiling is a massive art nouveau stained glass light in a giant cupola supported by ornate plaster panels.  he floor is marble- massive white slabs of the stuff – polished and gleaming. In the middle of the restaurant is a white grand piano at which some maestro patiently explores his Beatles/Elton John/Sinatra songbook.

Our waiter is Alejandre who explains the wine to us. He says there is a Sangiovese from Italy and we say that that is one of our favourites and we talk about wine. He says that he has had some training as a sommelier and I say that I know a little about wine, but not much really. It turns that I know a great deal about wine in comparison to him and the next thing we are doing is drawing a map of France for him and identifying where the Rhone and Loire are and where the Medoc is. He is fascinated.

Unusually for a Mayan he is bald, and is strangely Buddha-like in his appearance; there’s a great quietness about him and a beatific smile.  During the course of our evening, which we spin out by sharing a starter and a desert, he comes to the table many times, just smiling and making sure all is good with us.

Each time we talk a little more, first about wine and then about where we come from and who we are. He tells us that he is married with a son and that he is completely dedicated to his family but that for many years he was a bad boy until he found his way. He smiles guardedly as he tells us this and I ask no further. By the end of the evening we feel so warmly towards him, and he shakes us by the hand and we thank each other for the time we have had together. We leave him five dollars as the only way we can show him our affection.

Three days and two Grateful Dead concerts later we return to the restaurant. We wait to be seated and ask if we can be in the area that Alejandre is working. The reception staff look at us uncertainly, with questioning eyes as, of course, this is not something that happens: you do not usually specify your waiter in a restaurant.

But despite their scepticism we are are led by the reception people to a table where Alejandre is waiting for us and we tell him that we have only come back so that we can talk to him some more. We order the same meal and the same wine as last time and, as before, he passes by our table many times during the hours we are there.

He talks about the Mayan people and answers my questions with quiet certainty. The Mayans are humble people; they aspire for happiness in a way that is not material. They are mostly Catholics but it’s a catholicism which is overlaid on a deep sense of the Mayan history and cultural values. They smile to each other and talk together because their happiness is dependent on the happiness of others and they wait on tables uncomplainingly because they are happy to make others happy.

They want little more from life other than a good family, a community, enough to live on but most of all a sense of inner calm and wellbeing.  As the evening goes on we talk more and more about ourselves and at the end of it all we rise to leave and he thanks us for our warmth and we thank him for his attention and his kindness and he hugs us both. I tell him that we have so much in common but everything in every aspect of our lives is different; the colour of our eyes, the colour of our skin and where we are in the world.

He looks at me with a smile whose warmth is almost impossible to bear and points to his eyes and ours. It is about love he says and I see it in your eyes. Your eyes are the windows to your heart.