Sheilagh Matheson, our avian correspondent, reports on a village plagued by….. peacocks. 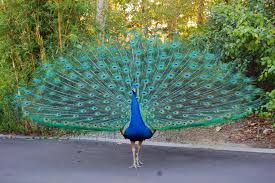 An elderly man named Terry dishes his breakfast on to a plate, sprinkles it with salt and tucks into fried peacock egg. His next door neighbour is outside, wielding a broom handle to chase brooding peacocks off the roof of his Fiesta. And at the end of the road, Mrs Fenwick steps off the pavement to avoid a gang of the birds swaggering into town.

Meet the peacocks of Ushaw Moor in County Durham, a former pit village and unlikely home to flocks of these exotic birds. Until a decade ago, the only distinguishing feature in the village was the nearby Roman Catholic seminary. Despite the best efforts of Sheila’s Cafe, the local Co-op and the Flass Inn, on a January day Ushaw Moor is the definition of dreariness.

Until, that is, a flicker of iridescent blue and green flashes between the sycamores. Some peacocks are probably heading for Keith Barkess’s back garden because he has been feeding them for years.

Inside the Flass Inn, the locals speculate about the number of peacocks living around Ushaw Moor and their estimates vary from 15 to 30. No one seems to know exactly how they arrived or where they roost. One person suggests a farmer at nearby Broom Hall Farm kept them as pets but some escaped and bred in the wild. Another says when the farm was sold and became a riding school the new owners weren’t interested in the peacocks and let them roam freely. The current owner, Calvin Moore, denies all knowledge and reckons it’s a privilege living with such beautiful birds.

Not everyone agrees with Calvin. According to Donna Barkess, Keith’s niece, when all the peacocks are out it’s like living in Chicago in the 30s, with gangs of birds marauding the streets. “They come into the back garden and it’s like Wellington bombers landing. They’re huge birds and when they fly past the window you duck,” she said. “Uncle Keith says they eat anything. When he didn’t want his roast dinner, he told me to leave it in the garden so the peacocks could have it.” 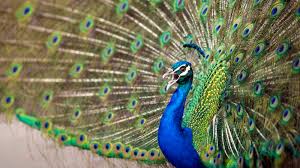 One resident was besieged by thirteen peacocks lounging around on her decking. She calls the biggest male Dave. “You don’t want to slip in one of their poos,” she said. “It’s not a good start to the day.”

Most villagers are nonchalant about them, but in 2016 Graham Bridge set up a petition calling on Durham County Council to rid the village of the plague of birds and about 100 people signed it. They objected to their noisy calls and the mess peacocks leave behind.

They also damage parked cars. Their claws scratch the paintwork and occasionally they try to attack their own reflection, thinking it’s another dominant male. But Terry likes having them around. “I don’t see the problem. They’re ah reet. They lay their eggs in the hedge at the bottom of my garden sometimes, and they’re like a cross between a duck egg and a goose egg. I fry them and eat them and they taste fine. After all, an egg’s an egg when all’s said and done.”

Durham Council said they would investigate the noise levels. But meanwhile, the peacocks seem perfectly content to rule the roost at Ushaw Moor and provide Terry with his breakfast egg.