A major new report reveals that thousands of automotive, rail and aerospace jobs across the country are at risk as a result of the UK’s exit from the European Union.

Academic researchers and industry experts at Birmingham City University’s Centre for Brexit Studies have issued the warning along with recommendations to transport manufacturing industries and their supply chains. 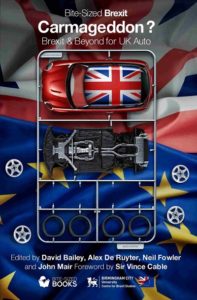 The new Brexit and UK Auto, Rail and Aerospace: Understanding Logistics and Supply Chain study, suggests the auto, rail and aerospace supply chains in the West Midlands are “increasingly fragile” given their exposure to logistics dependency on the Channel Tunnel and ports in the South-East of the UK.

Surveying over 200 firms in the region in late 2019, the research, funded by West Midlands Combined Authority, finds that according to the sample, transport manufacturers and suppliers in the Midlands:

· are particularly exposed to the operations of Jaguar Land Rover, given its dominance in the region

· have significant exposure to other manufacturers, including Honda – who have already announced their intention to close down their Swindon plant by 2022

· have a high dependency on EU workers, with EU nationals accounting for an average 31% of the workforce

· have a high dependency on the Channel Tunnel, with 17% of exporters and 14% of importers exclusively using the Chunnel

· have a high use on the ports of Liverpool, Southampton, Immingham and Felixstowe, placing additional pressure on regional transport networks in the event of a ‘hard Brexit’

Carmageddon? Brexit and Beyond for UK Auto, a new compact format book which draws together contributors from academia, policy and practice and links analysis of the likely impact of Brexit to wider global trends affecting the sector, will be launched alongside the research at a Birmingham event on Wednesday 29th January.

Former Secretary of State for Business, Innovation and Skills and Visiting Professor at the Centre for Brexit Studies, Sir Vince Cable commented, “The auto industry in the UK pre-2016 was a remarkable success story with high levels of investment and output growth, with its success underpinned by a number of key factors. This now seems like a distant dream, with UK Government spokespersons already talking about automobiles being a ‘declining industry’.

“So the industry face big challenges on a number of fronts, and there is a real need to reiterate the importance of the sector to UK PLC going forward. Not only is the form of Brexit critical for its future but so too is a renewed effort in terms of industrial policy to seize the opportunities from the transition to electric vehicles.”

Transport manufacturing industries continue to be of vital importance to the UK economy. In 2018, UK auto alone was directly worth £16.9 billion to the economy and represented over 9% of total UK manufacturing.

However, the decision to exit the EU and pull out of the Single Market in effect by the end of this year has generated uncertainly and anxiety for UK-based manufacturers.

Professor Alex de Ruyter, Director of the Centre for Brexit Studies and co-author of Carmageddon? said, “If even a small proportion of traffic from the Channel Tunnel gets rerouted, it will cause an increase in port traffic elsewhere, placing additional strains on an underfunded regional rail and road network.”

“The West Midlands employs over 50,000 people in automotive alone and another 20,000 in related sectors. Our analysis suggests that tens of thousands of jobs in the sector would be exposed in the event of a hard Brexit. For policymakers then, the lesson is clear that any trade agreement with the EU needs to ensure minimal disruption to the supply chain operations of our manufacturers which looks increasingly fragile in the current economic and political climate”.

The findings of the Brexit and UK Auto, Rail and Aerospace: Understanding Logistics and Supply Chain research will be launched alongside Carmageddon? Brexit and Beyond for UK Auto, at a breakfast event at Birmingham City University’s STEAMhouse Birmingham on Wednesday 29th January.