The Lincoln Center Theater’s production of The King and I has swept into Birmingham on the back of multiple Tony awards on Broadway and a sell-out run in the West End.

Gracing the city’s Alexandra Theatre for the holiday season, Midlanders will be thrilled by the brilliance of this Rodgers & Hammerstein musical revival directed by Bartlett Sher.

The show pulsates with passion and energy from the start of the opening scene as a boat steams into port with the I of our heroine Anna Leonowens, standing on the prow in a ravishing Victorian dress, looks out with a mix of excitement and nervousness.

For this young widowed governess, accompanied by her son, has arrived in Bangkok from Singapore to take up the post of governess to the children of the King of Siam. 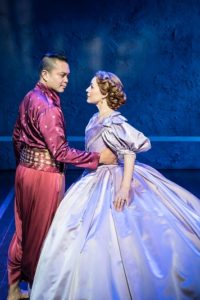 to prostrate themselves in subservience. Anna herself is exempted only after being granted honorary male status as a teacher.
Based on the the real Anna Leonowens of the 1860s, whose diary was turned into the novel Anna and the King of Siam by Margaret Landon from which the musical was created, this wonderful show is full of modern resonances.

Anxious of colonial expansion in the region, the King speaks about “building a wall” around his country. Giving more than a nod to the MeToo movement, he is astounded and intrigued by an independent woman from the West who dares to educate him.

Through its themes of East versus West and modernity versus tradition, Anna and the King play out a deft two-hander that inevitably leads to mutual respect and love.

Annalene Beechey and Jose Llana make a perfectly matched duo in the title roles, with their changing relationship explored in a fully believable way through their outstanding acting, singing and dancing skills.

Indeed, Beechey is sensational as the self-willed woman whose humour and humanity takes you from laughter to tears, especially in her renditions of those perennial musical favourites I Whistle a Happy Tune, Hello Young Lovers and Shall We Dance?

There is also tremendous support from an Asian ethnic supporting cast, not least from Cezarah Bonner as Lady Thiang, the King’s head wife, and Paulina Yeung as Tuptim, a gift to the King from the King of Burma and her lover Lin Tha, played by Ethan Le Phong.

A clutch of charming children, most of whom are making their professional debut in acting role, and a fabulous 15-minute Asian ballet scene after the interval, help raise this show to the heights of family entertainment.

The costumes and sets are also gloriously colourful and exotic, and the memorable score is played with real flair and verve by a live orchestra. No wonder the opening night performance brought a standing ovation and a roar of approval at the curtain call.