Richard Lutz take his pew for a fanfare of classics. 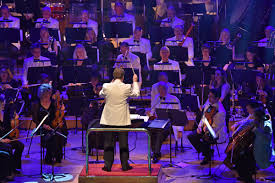 Birmingham’s usually staid Symphony Hall was filled to its elegant rafters for this end of the year classical bash and everyone seemed to have been waiting for their own personalfavourite.

And who could miss out on their Number One hit: fom a Carmen aria to Strauss’s waltzes to the rousing thrill of Coates’ Dambusters, it was there for the taking.

Conductor John Pryce-Jones carefully led the packed audience through the back-stories of these chosen selections and wittily gave just enough information to prick the interest of the audience. Not that they needed much goading. Each song, each instrumental, was enough to raise an appreciative cheer or an ovation.

The cast included a pair of opera singers, Robyn Lyn Evans (tenor) and James Cleverton (baritone) and they roused the crowd with solos from Don Giovanni, The Pearl Fishers and an hilarious interlude from Barber of Seville. But why not the beauty of a female voice? It was very much a man’s night out on the stage.

Inevitably, the crowd got what they wanted: a rousing finale packed with hearty favourites: Nessun Dorma, Pomp and Circumstance and Hope and Glory. Mr Pryce-Jones at the podium and producer Raymond Gubbay (who organises these festive proms throughout the UK) know their audience…and they deliver.