Hugh Cornwell is a musical icon whose career with the Stranglers and latterly solo goes back over forty years. So it was a bit of a surprise to find him bright-eyed and wide awake at 9.30 am, a time most musicians would only regard as a nasty rumour.

Is it a late night or an early start?

“The clocks went back last week so you’ve got to get up earlier otherwise the day’s finished by four o’clock. There was a time when I didn’t get up this early – when you start making it big in this business you’re like kids in a sweetshop – but those days are long gone.”

The album Monster that came out last year. It’s a collection of songs about people; tell us about the concept behind it.

“It became a collection of songs about people who hadn’t had songs written about them. It started off when my mum passed away five or six years ago and I wanted to write in memory of her life, in tribute to her. That came out as La Grande Dame. I was really pleased with how that came out and one by one the others surfaced. I didn’t think any of the songs would have any connection with the others, but they started to emerge.

“The first one was about Evel Knievel. I was watching a film about him and I realised that despite the connection between motorbikes and rock’n’roll nobody had ever written a song about him. I thought it was bad that he hadn’t entered the mythology of rock music, so that one came and the rest followed.”

Bilko’s another one. Were you a fan of his?

“Of course. I had to be a fan to write a song about him. These days when the new TV channels are resurrecting the old series, one of them is surely going to grab Bilko. There’s 156 episodes and most of it is sheer genius.”

On this tour you’re doing a solo set followed by Stranglers material, which you’ve never really done before.

“I did it last year with the first Monster tour and it went down really well. It showed out how good the Stranglers catalogue is, and also that people enjoy my solo set. It’s nice to separate them again, but because it’s the second tour for 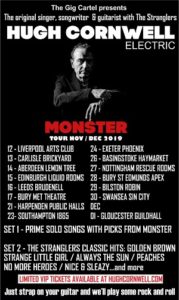 the album we’ve drastically changed the first set. There’s different solo tracks from different albums and also Beyond Elysian Fields, an album I did with Tony Visconti, has been remastered and that’s coming out so I’m playing tracks from that.”

You’ve done ten studio albums solo, plus a load of live ones. That’s productivity on almost an industrial scale. Where do you find the ideas from after all these years?

“They just occur. I’m fascinated about life and people, there’s always things I’m curious about and I think might make a new idea for a song. I’m a chronicler like Samuel Pepys, a mental diarist. I find that the feeling wells up, I have a period of about eighteen months when I write a lot of songs, then try and records them in the right way. I can feel another surge coming up so I’ve got to act on it.”

How do you get on with the Stranglers now?

“I don’t have any contact with them. I’m happy that they’re out there playing the old material and getting new fans, I get the royalties so they can play to as many people as they like. It’s a calling card and it introduces people to what I’m doing.”

You seem quite relaxed about their fairly fluid line-up.

“It’s a fact of life. Music is a corporate business – look at Queen with new singers, Fleetwood Mac with Neil Finn coming in and pretending to be Lindsay Buckingham. That’s big business;, if people can continue earning a living with a brand they’re keen to do it.

“I’ll accept the fact that the line-up is changing, there’s going to be a time when Dave or Jean Jacques don’t want to do it, or god forbid they might be ill, and if that happens do you think the rest are going to cancel the tour? It’s not the original line-up anyway so what does it matter? Get someone else in”

The original line-up was four seperate personalities who came together. It wasn’t like, say, the Boomtown Rats who were Bob Geldof and his backing band.

“Nobody took the limelight. On the first album cover I was at the back and I was the singer. That’s for other people to discuss, I just went out there and did it.”

And you’re still doing it, at the Robin 2 again.

“It’s a great venue. Mike did a great job, the place is an institution and if anywhere epitomises rock’n’roll it’s the Robin 2. I always have a great time there and everyone I know who play there says the same thing.”