The bright red and orange coloured front-of-house curtain suggests we’re off to sunny Spain but the opening to Carmen takes us somewhere quite different.

Soldiers with machine guns are behind a corrugated fence, killing time while waiting for a change of guard, and behind them a dark semi-circular tenement block is a hive of barely lit domestic activity in Welsh National Opera’s new production at Birmingham Hippodrome.

Director Jo Davies has moved the action from its original 1830s Spanish setting to a 1970s Brazil under some form of military control. According to her programme 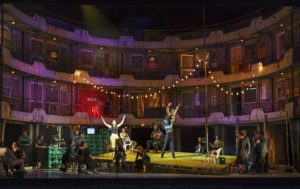 notes, this is to emphasise class division and to help ask the question why a poor young woman should have to die for being a free spirit.

As a gypsy who works in a cigarette factory, Carmen’s limited pleasures in life amount to little more than smoking and playing the field with a heart that flits easily from man to man. She meets a soldier, a corporal already spoken for, who develops an obsession for her that leads to tragedy.

Virginie Verrez takes on the title role as a femme fatale far from the despicable whore that early audiences viewed the character when Bizet broke with convention to create one of the first and greatest of realistic operas.

Helped by singing in her native French, Verrez gives a bravura performance as a thoroughly modern Carmen, as nonchalant as she is seductive, and confident enough in her sexuality and allure to entrap anyone she desires. Unlike a victim in the Me Too-sense, she is a woman who remains in control.

Flaunting her preference for the handsome bullfighter Escamillo, portrayed as a strutting man of the people by Phillip Rhodes, she recklessly ignores all the warnings and faces the consequences when she herself knows she has gone too far.

The tenor Dimitri Pittas plays a sweaty violent and strong Don Jose with an ailing mother that wishes to forgive him for something seemingly heinous that he has committed (possibly murder, we are never told) and for him to return home from the army to their village and marry his long-time girlfriend Micaela.

Indeed, it is Micaela who deserves our greatest sympathies as the devoted go-between who bravely tries to save her beloved Don Jose from Carmen’s clutches, if only for his own good.

Anita Watson delivers a heartachingly moving rendition of Micaela’s aria Je dis que rien ne m’epouvante (I say that nothing frightens me) as she confronts her feelings before approaching the hideaway of local gunrunners. It is here that Don Jose has had to flee after a jealous confrontation with the officer Zuniga, played as a mighty bass in both voice and physique by Henry Waddington.

This is a thrilling production with singing of the highest quality not only from the protagonists but all the supporting cast, dancers and WNO Chorus, as well as an especially talented crop of children.

The familiar songs, including Carmen’s seductive Habanera, L’amour est un oiseau rebelle (Love is a rebellious bird) and the Toreador’s Song are sung with passion and elan, as is the playing of the sizzling score by the WNO Orchestra under the direction of Tomas Hanus.

Full marks also go to designer Leslie Travers for a highly detailed set that serves multiple purposes from an inn to a bullring, helped in no small measure by superb lighting from Oliver Fenwick.

You can’t help but head home after this show with an earwig for those catchy tunes, while also believing in that age-old view that Mums always know best.

Welsh National Opera’s production of Carmen will return to Birmingham Hippodrome on November 8th and again on May 7th, 2020. WNO will also perform Rigoletto on November 9th (www.wno.org.uk).