Birmingham MP Liam Byrne has announced his plans to make homelessness history in the West Midlands, including ensuring the region becomes Britain’s biggest council house builder, cracking down on rogue landlords, and cutting the costs of Andy Street’s £1 million ‘secret consultants’ to spend on shelter beds for rough sleepers instead. 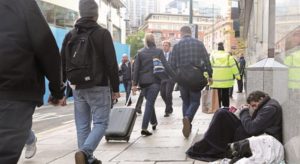 The plan to tackle to homelessness – both rough sleeping and the scandal of temporary accommodation – includes:

1. Cutting the £1 million costs of the Mayor’s ‘secret consultants’ and using the money to create an Emergency Fund to pay for round the clock support and shelter, guaranteeing that we have more beds than rough sleepers all year-round so that no-one need sleep homeless. These services will build on and expand the models pioneered by the Good Shepherd Ministry in Wolverhampton, Birmingham’s Sifa Fireside, Hope into Action Black Country and Hope Coventry.

• Last year, just 1,482 affordable homes were built in our region. Our goal is to add at least 1,500 homes on top of this each year. This will allow us to halve the current 35 years it is likely to take to offer a home to all the 51,870 people on council waiting lists in our region.

• Wherever possible, these will be green council houses – with solar panels, household batteries and EV charge points, almost eliminating energy bills, and safeguarding against fuel poverty.

• Accommodation supply for women escaping domestic violence will also be immediately expanded, building on the work of some Labour councils already doing this.

4. Create a region-wide private landlord licensing scheme to crack down on unfair practice and exploitation.

Already some cities like Liverpool are pursuing region-wide private sector landlord licensing schemes to crack down on dodgy landlords. Byrne would follow suite, with a goal of raising all home to a healthy homes standard set by the Town and Country Planning Association.

Nobby Clarke, Coventry Winter Night Shelter founder & Coventry Emergency Shelter Project Leader, said: “Liam Byrne is the first senior politician to convince me that they have a grasp of the problems faced by the vulnerable and the homeless, as well as a realistic understanding of the necessary strategy needed to reduce the impact of poverty and promote a hopeful recovery in our community.

” I will certainly be supporting his bid to represent Labour in the Metro Mayor campaign and help to defeat the hollow rhetoric of the current incumbent.”

Cllr Sharon Thompson, Cabinet Member for Homes and Neighbourhoods, Birmingham City Council, added: “Liam’s passion, drive and work ethic, his inspiring work on homelessness and his ambitious strategy for the West Midlands means that he is a candidate who can fight and win the Mayorality for Labour. He’s got my full support.”

Cllr John Cotton, Chair of Labour Housing Association commented: “Liam is right: homelessness is a moral emergency – so what we need is a Labour Metro-Mayor with both the personal passion to end it and the deep commitment to back up Labour councils on the frontline. Liam has both and that’s why I’m supporting him.”

Meanwhile Byrne, the MP for Hodge Hill, said: “It is simply not acceptable that we have people dying on our streets in one of the richest countries on Earth. Our moral mission must be to make homelessness history. That means we need a mayor who is really going to turbo-charge the work of our region’s coalition of kindness, of food banks, councilors, and shelters, in ending this moral emergency once and for all.

“This is a political struggle but for me, it’s personal. After losing my dad to a lifelong struggle with alcohol, I began to work with our homeless community and came to learn how many are self-medicating trauma with alcohol and drugs in exactly the way my dad was. But they lost their home as a result.

“As a constituency MP, I now have more cases of constituents requiring housing support than any other issue. We’re supporting families and children living week to week in Travelodges. It’s just not right and I’m not prepared to stand by and watch this moral emergency continue.

“As Mayor, I will crack down on rogue landlords who exploit vulnerable tenants, double the number of affordable homes we build so people aren’t left waiting decades for a council house, and put the costs of Andy Street’s secret consultants into ensuring there are enough shelter beds for every rough sleeper.”