New temporary exhibition on James Watt to open at the Library of Birmingham.

A new exhibition on James Watt will preview at the Library of Birmingham on Thursday 11th July.

Watt in the World – The life and legacy of James Watt 1736-1819 forms the centrepiece of the Lunar Society’s James Watt Bicentenary programme and will run from Friday 12th July to Saturday 2nd November 2019.

Highlights include James Watt’s notebooks that detail his experiments, personal correspondence with friends and family, silverware by Matthew Boulton, a letter copy press designed by Watt; and Sir Thomas Lawrence’s 1812 portrait of the great engineer.

The exhibition preview will be accompanied by the Birmingham launch of a major new book – The Power to Change the World: James Watt – a life in 50 objects – edited by the University of Birmingham’s Dr Malcolm Dick OBE, a guest curator at the Library of Birmingham, and Dr Kate Croft and published by History West Midlands.

Born in Greenock in Scotland in 1736, James Watt moved to Birmingham in 1774 to enter into partnership with Matthew Boulton (1728-1809) to manufacture an improved steam engine that incorporated his innovation of the separate condenser. The Boulton & Watt engine was to become, quite literally, one of the drivers of the Industrial Revolution in Britain and around the world. 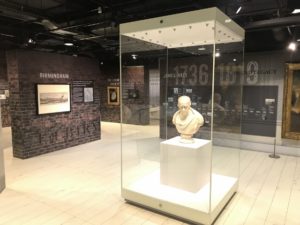 Whilst best known for his improvements to the steam engine, Watt was a man of many other talents – scientific instrument maker, civil engineer, chemist, inventor and member of the renowned Lunar Society.

In addition to the exhibition, other Bicentenary activities taking place this year include talks, tours, films, concerts, art installations and family activities; a James Watt city heritage trail; a schools project; a community engagement programme focussed on Handsworth (where Watt lived for 30 years until his death in 1819) and a conference hosted by the University of Birmingham.

Rt Hon Jacqui Smith, Chair of the Lunar Society, said: “The Lunar Society is delighted to be leading the James Watt Bicentenary programme to commemorate the achievements of the great engineer.

“The Watt in the World exhibition will tell the story of Watt’s life and achievements and perhaps also inspire future generations of Brummies to follow in his footsteps.”

Cllr Brigid Jones, deputy leader of Birmingham City Council, addedd: “Birmingham is world-famous for being a city of innovation. 200 years ago, newcomers like James Watt came to our city because of its reputation for being creative, industrious and welcoming to new people and ideas. Those core characteristics could equally describe Birmingham today.

“The James Watt archive at the Library of Birmingham is an historic collection of world importance. Thanks to the hard work of partners including the Lunar Society, the University of Birmingham and the Birmingham Museums Trust, it is a great opportunity to see the story of James Watt being brought to life.”

Dr Malcolm Dick OBE, Senior Lecturer at the University of Birmingham and Director of the Centre for West Midlands History, commented, “Exhibitions like this are crucial to help us understand our region’s rich human and material history. It has been a pleasure working with many talented and committed people to put together an illuminating set of displays, including how Watt has been portrayed in popular culture.

“The exhibition takes visitors on various journeys to understand how Watt and his achievements were created, shaped and represented locally, nationally and internationally.”

For more details about the Watt Bicentenary programme visit www.jameswatt2019.org