Richard Nevin takes a walk through the woods with the Modfather.

It’s not quite the rock’n’roll of legend. Where once we imagined debauchery there are now deckchairs, talk of classic cars replaces the search for Class A drugs, running buffets rather than running battles are the order of the day and everything is unerringly civilised. This is down to one thing and one thing only; age.

As the Modfather has aged then so have we, so that this gathering in the bucolic surroundings of a Staffordshire beauty spot has a relaxed air. Part of the Forestry Commissions summer series of gigs, this is Weller’s second time out at this venue and mercifully the weather stayed fine as we delved into wicker baskets and drank lukewarm alcohol from plastic glasses. Taking your own food and drink is encouraged so it’s picnic time as everyone gathers in the natural amphitheatre that hosts this evening’s show, those who still crave the old days can gather in front of the stage, dreaming of Bingley Hall(s), and the crowded, sweaty gigs of yore. 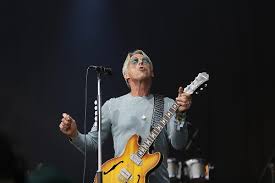 Weller acolytes The Stone Foundation kick things off in the evening sunshine. The Tamworth band are more than suitable fare, the blend of R&B and soul-influenced music fitting in perfectly as a taster to the main event.

There’s just time to grab a health food snack or some freshly cut kiwi fruit before our headliner takes the stage. This isn’t my first time watching Paul Weller and I always find it difficult to judge whether he is actually enjoying himself up there, he has often cut a surly and serious figure and onstage and while that is the predominant feature once again I detected and more laid back attitude, something that was reflected in the set list, made up as it was of plenty of crowd pleasers.

Style Council hits and Jam classics sat comfortably alongside his impressive cannon of solo material. The addition of the support bands brass section towards the climax certainly beefed up the sound, impressive and clear as it was from our vantage point halfway back in the arena and it wasn’t long before the area behind the mixing desk became an impromptu dance floor. Fuelled no doubt by prosecco and pear cider, the fading light and misplaced confidence, we jumped about on the lush grass a combination of clumsy northern soul stylings, pointless pointing and occasional air guitar from this rocker in a sea of Mods.

While heritage acts are pulling in the crowds all over the country it would be unfair to lump Paul Weller in with these, still making music and still expressing a vitality live, you feel that his story still has some distance to run and as the final strains of Malice fade away to the cheers and applause, that buzz still exists.

The hair is thinner, the waistlines broader and the trips to the facilities rather more frequent but despite the onset of age it still feels vital, still feels thrilling and it’s definitely still rock and roll to me.