Simon Hale enjoys an updated version of a classic opera.

When it was first staged in the mid-19th century, the opera’s comic focus was on the consequences of an old bachelor marrying a young woman in order to keep an Italian manor house in the family. Updated in micro-opera form for MAC Birmingham (and other small theatres), director Daisy Evans’ has taken liberties with the libretto while also moving the action to a Cardiff car park where a pared-down orchestra of seven musicians busk alongside Don(er) Pasquale’s kebab van.

Old Pasquale (played by Andrew Shore), an Italian migrant who moved to Wales in the 1970s, still feels he has what it takes to attract a sexy young wife to bear him a son rather than pass on his van to his nephew and employee Ernesto (Nico Darmanin). He dismisses Ernesto because, as he tells him, he is only interested in becoming a pop star and has a girlfriend Norina (Harriet Eyley) with an ‘alternative’ lifestyle that he doesn’t approve of. 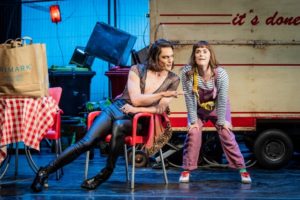 Malatesta (Quirijn De Lang), a Russell Brand-like character with eye shadow, lipstick and high heels who hangs out with the buskers, hatches a plan to turn the tables on Pasquale’s meanness by suggesting he marries his (imaginary) sister ‘Sofronia’ from Llandudno.

The ensuing ‘marriage’ provides one of the funniest scenes as Malatesta arranges for the ceremony to be conducted by video link to a crisp munching ‘notary’ played by none other than Welsh baritone legend Bryn Terfel, or as Malatesta later confesses, “Big Bryn from down the pub”.

Now facing an unexpected wave of environmentalism as result of his rash choice, Pasquale is forced to face up to a modern world in which the rack of grilled lamb in his eco-revamped van is replaced by a giant carrot, all plastic is banned, and kale juice is substituted for Coca Cola.

The cast, caricatures of what we in England would call ‘Welsh types’, all joyfully break the fourth wall as the audience is continually brought into the action perfectly attuned to the use of the vernacular.

What we are left with is not so much a story about the classic older man/younger wife dichotomy but one in which young love triumphs over the machinations of an old man who is stuck in the past, The story also delivers a message to us all to help save the planet. Indeed, as Pasquale admits to the audience: “The Millennials have won!”

With excellent acting and singing apart from one or two powerful outbursts by Eyley in which it was difficult to hear the words, and a top-notch orchestra conducted by Stephen Higgins, this show is an absolute hoot. Catch it while it’s still in the Midlands.

Don Pasquale will be performed at The Courtyard, Hereford on June 13th, Theatre Severn Shrewsbury on June 16th, and Oxford Playhouse on June 18th as part of a UK tour ending at Theatre Royal, Winchester on July 13th (www.wno.org.uk)