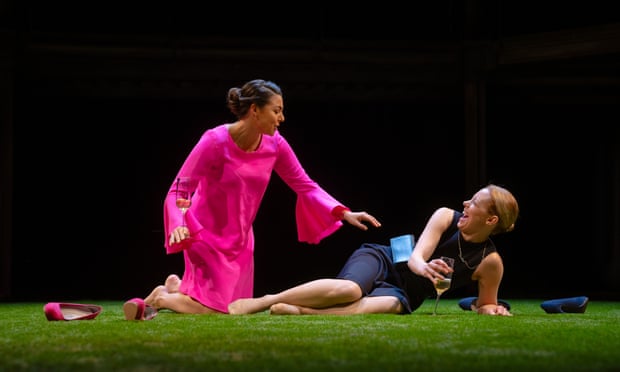 A theatre expert wrote that As You Like It is Shakespeare’s ‘most elegant play’- an enchanting series of debates wrapped inside the woods of Arden, a comic discourse on nature versus court, truth versus lies, the eternal battle of the sexes.

The RSC’s new version succeeds in obscuring these zippy debates. Director Kimberley Sykes uses every trick in the book to bump it up. But the result, sadly, distracts rather than enhances. Thus, you get the inevitable giant puppet, a gender-swapping cast, a burst of rap, the breaking of the wall to chat with the audience and invite them on the stage, a disjointed attempt of watching the actors dressing for their next scene. It doesn’t work.

To be fair, this production, on through the summer at Stratford, does offer brightness. The role of Rosalind, forced to pretend she is a boy as she hides from a death sentence, is played with cheeky zest by Lucy Phelps (seen above on the right). She is adroit,  especially when handling the inevitable Shakespearean trick of re-enacting a role of a boy actor playing a girl playing a boy playing a girl. Her loyal cousin, Celia, is equally well portrayed by Sophie Levy Khan. Together they are girls-chums in the woods, ready to deal with philosophic shepherds, a Robin Hood of a banished duke and, of course, the central story of a boyish Orlando a-hunting for his lost love. 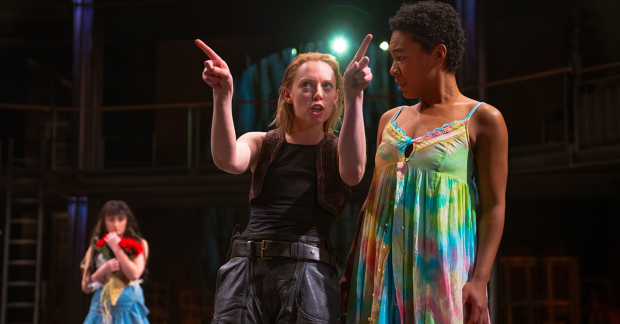 But, centrally, this is a play about words, words, words. And many times they are obscured, obscured, obscured. The classic Seven Ages of Man speech, so often quoted, is light on impact by actress Sophie Stanton, who takes on the lugubrious male role of Jacques. The roll-out of quickfire banter, so full of allusions and Elizabethan word play, is masked by style rather than buoyed up by it. It shouldn’t be like this.

In the epilogue, Phelps’ Rosalind, (who speaks a quarter of all lines) tells us “to like as much of this play as you perceive”. Sometimes, you get more than you bargained for when you say things like that.

Until 31st August at the Royal Shakespeare Theatre, Stratford.

One thought on “As You Like It: Bells, whistles but all too tricksy”