Launch party gets nominations off to a flying start.

BPS Birmingham Future’s flagship awards, Birmingham Young Professional of the Year 2019, has officially launched, with nominations opening across six categories ahead of the region’s most prominent awards celebration.

BYPY 2019 launched nominations during the exclusive launch event on Thursday March 7th at the Mailbox’s Aluna. The event saw nearly 200 people join the party in anticipation of the city’s most prestigious award nominations opening. Nominations opened across all six categories ahead of the awards celebration, which will take place at the ICC on Thursday May 16th.

Tickets for the awards ceremony are also now on sale here. 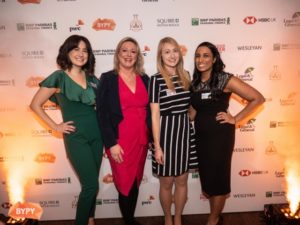 Laura Thursfield, BYPY 2018, then followed by sharing her story of winning the prestigious title last year, and how it changed her life with new opportunities.

Guests then heard from headline sponsor BNP Paribas Personal Financeas Jayne Licari, Brand, PR and External Communications Manager, shared why they have returned as the headline sponsor and what it means to them to support the progression and development of young people.

The nominations were then launched with orange geysers and a cheer from the crowd. The event continued into the evening and offered young professionals the opportunity to gain an insight into BYPY. The guests were able to discover the best methods of nominating, meet past winners and finalists, and network with their peers to celebrate the best of Birmingham’s talent.

Nominations will be open here until April 1st, and the committee are encouraging all to nominate anyone who you believe deserves the accolade of being Birmingham Young Professional of the Year or to even nominate yourself if you believe you may be a strong contender. Nominations are open across the following categories:

The BYPY Committee and BPS Development Committee have joined forces to put on ‘Storytelling For Success’ at Birmingham Hippodrome on March 19th. Helga Henry will lead a free workshop on how you can utilise storytelling to give your BYPY application an added edge. Helga will draw on her extensive professional experience to help you discover your ‘personal brand’; perfect for ensuring your BYPY application is memorable, whilst giving you the skills of ‘storytelling for success’ for your future.

Ticket sales for the awards ceremony are also live “>here