Celebrating the life and times of John Le Mesurier.

Following a sell-out run at Edinburgh Julian Dutton comes to Artrix in Bromsgrove with Do You Think That’s Wise?, the Life and Times of John Le Mesurier, on Saturday 30th March at 7.30pm. 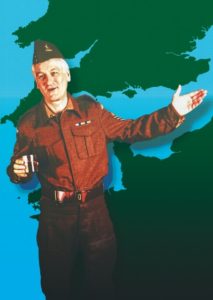 As with many comedy stars, Le Mesurier’s life was not without tragedy – his broken marriage to Hattie Jacques, his betrayal by his best friend Tony Hancock – all these setbacks shook him, but his reputation as the quintessential English gentleman never wavered.

Packed with glorious reminiscences and stories from the Golden Age of Classic British Comedy, Julian Dutton’s show is a joyful and moving celebration of one of the most popular comic actors of our era.

Julian Dutton is a writer and performer whose work has won a British Comedy Award, a BAFTA, and a Radio Academy Gold Award. He is the co-creator & co-writer of the BBC TV comedy series Pompidou starring Matt Lucas; co-created, wrote & performed in four series of the BBC1 comedy hit The Big Impression with Alistair McGowan, and his CBBC sitcom Scoop ran for three series of 39 episodes.

Most recently he won the Radio Academy Gold Award for writing & performing in the impressions series The Secret World with Bill Dare for BBC Radio 4. He has toured as a comedian and impressionist and appeared in the West End supporting many of Britain’s top comics like Harry Hill and Al Murray.