Famous faces from across Birmingham and the Black Country came together earlier this month to celebrate Birmingham St Mary’s Hospice’s 40th anniversary.

The celebrities were joined by local businesses, community groups and big-hearted supporters, who together are on track to raise a remarkable £20,000.

Over 230 guests attended the glittering black tie event, which was held at Edgbaston Stadium on Friday 1 March. They enjoyed a drinks reception, three-course dinner, musical entertainment from Midlands’ band The Bright Eyes, and a lively comedic set from the self-proclaimed ‘most popular housewife in Kings Heath’, Barbara Nice. 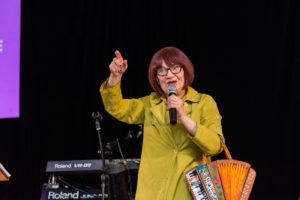 The event kick started a year of 40th anniversary celebrations, which will all honour the care and support the Hospice has provided across Birmingham and Sandwell for the last four decades.

Birmingham St Mary’s Hospice was founded in 1979 by Monica Pearce and was the first independent hospice in the Midlands. A former NHS matron, Monica’s vision was to ‘enable anyone with a life-limiting illness to live their life to the full’ – a mission that the Hospice’s staff and volunteers still stand by today. First known as St. Mary’s Hospice, the charity cared for its first patient on Monday 5 March 1979.

Former West Brom defender, Brendon Batson, was made patron of the Hospice in 2017, after doctors and nurses cared for his wife Cecily in the comfort of their family home. He said: “The care Cecily and my family received was just incredible. It was a massive comfort that she was cared for at home and I’ll never forget the kindness and dignity the nurses and doctors showed us.

“I’m very proud to be a patron of the Hospice and it was fantastic to see so many people come together to celebrate its 40th anniversary. 40 years of care is an amazing achievement and with continued support, I look forward to seeing the Hospice grow and evolve in the next few decades.”

Tina Swani, chief executive at Birmingham St Mary’s Hospice, added: “We had a fantastic night welcoming generous supporters to our gala dinner and I would like to thank everyone for coming along and celebrating this landmark anniversary with us.

“Whilst the evening celebrated our proud history and the legacy of our founder Monica Pearce, it was also a chance to show the community how crucial hospice care still is in our city today and how demand for it will continue to grow in the future.”

In 1979, Birmingham St Mary’s Hospice could care for 25 people on any given day. Four decades later and the Hospice is supporting over 400 people every day across Birmingham and Sandwell, providing care in people’s homes, in the community, at its Day Hospice facility and at the Hospice’s Inpatient Unit.

To find out more about the Hospice’s proud history and its upcoming 40th celebrations, visit here