Bernadette Jackson goes to the biggest party in town.

Yesterday saw a celebration of the 130 years of Birmingham’s city status. Birmingham’s not always a city to shout about how great it is, but #Brum130 danced, spoke, played and sang for the occasion.

A crowd gathered in Victoria Square at dusk, the foyer of the Council House already aglow, to see a spectacle that felt like the Birmingham I have now known for three decades. Opening with a performance from vocalist Shenai, Creative Director Steady Steadman put together a programme that truly reflected the heart of the city.

Birmingham was officially granted city status in January 1889. That date makes us think of all the exciting developments happening in the city at the time, and the diverse and vibrant Birmingham that exists now. The special pop up event created by Mohammed Ali MBE and Steady Steadman was designed to capture the spirit of the city and its people.

There was dance that told the story of the city’s thousand trades, and more dance telling the stories of the people who came to the city to make its future along with theirs.

Hat tip to ACE Dance and Music, Key Infinity and the soloist Marso for great performances. It’s really difficult to be taking pics when all you want to do is join in and your knees are moving involuntarily. The spoken word performance from Tarju Le’Sano reverberated across the square to a silent and appreciative crowd, ready with plenty 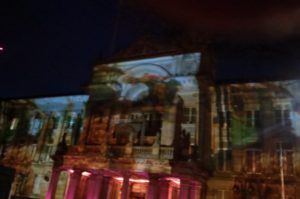 Throughout, Shenai’s starkly beautiful voice added to the setting. Atmospheric is an overused word, but here it was really apt.

We had to wait for the sky to darken a little before we could really appreciate the beauty of the projections onto the Council House. Created by Mohammed Ali MBE, the ambient projection and live line drawing covered both wings of the building. The scenes told the story of Birmingham’s people and its landmarks through art and film, focusing on the many neighbourhoods of the city.

I was entranced by the beauty of the images and their clarity: no mean feat when projected onto a building as architecturally complicated as the Council House with all its ornate windows and decoration. The music that filled the square was sparse, deep and melodic, and it called to people in the area to come and share the celebration.

I was equally captivated by people watching and the projection itself. Office workers stopped, gazing open-mouthed in the soft rain. Four police officers lingered to marvel at the city they see from a different angle. There were small children, excitedly pointing at places they recognised, and adults quietly sharing their memories.

Then there was the beauty of the city itself. I’m not ashamed to say that it made me proud of the story of Birmingham, and a little damp of eye at the thought of all it has achieved without fanfare. And while we watched the celebration of Birmingham past and present, the crane at Paradise Circus continued to make Birmingham’s future.

Happy #Brum130 to the city that achieves so much, and often silently.